some time has passed since I last hosted a fellow traveller here, amidst stories dedicated to my wanderings.

A few weeks ago, however, on a very hot July evening, in Ebe Tirassa’ wonderful art atelier (link official website; link Facebook page), I learnt about a project that surprised me, both for its explicit theme (i.e. unusual travel destination) and for its less obvious, but very current topic (i.e. the past that lingers on). Therefore, I thought I’d have a chat with Francesco “Frank F” Ferreri, one of the members of the EFFTER group, creators of the Blockhaus Project. Ready? Steady? Go! 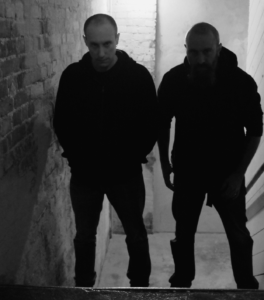 Francesco, first of all, tell me who the EFFTERs are.

The Effter (www.effter.com) is a musical duo formed by me and Alessandro “JQR” Ielo. Both from Milan, we met in the summer of 2009 in Berlin. Our music ranges from electronics to metal, from industrial to breakcore, to noise music. We are strongly inspired by criminology, psychology, poetry, literature and cinema. We are dedicated to new and continuous musical experiments and we have always made sure to expand our work towards different artistic means. The Blockhaus project (http://effter.com/#blockhaus) is our highest expression in this sense.

When did Blockhaus take form?

Blockhaus is a project that began in September 2018, after a trip to Denmark.

What brought you to Denmark?

I went to Denmark on a regular holiday. I wanted to discover a place I had never visited before, and the final destination was supposed to be Skagen (interesting link from the local Office of Tourism), which is the furthermost northern point of the peninsula, where the Baltic and the North Sea meet.

And then, what happened?

I have never arrived in Skagen!

Along the way, in fact, I came across some strange reinforced concrete buildings. They laid abandoned along the Atlantic coast. I looked for information about them and discovered that these constructions are part of a frightening intention of World War II. Hilter dreamt of erecting a real “wall” made of fortifications and surface bunkers, from Norway to Normandy, to protect the European coasts.

Exactly. Of this initial Atlantic wall (this is the name of the aforementioned “wall”), several disturbing empty shells and rubble remain.

Once home, I proposed to Alessandro to go back together to photograph and video shoot these places, to make a sort of “sound” documentary. As a matter of fact, the main idea was to bring with us some instruments (small synthesizers, Tibetan bells, harmonica and a series of other pre-recorded instruments) and to play them inside these bunkers. We took it all up with a portable recorder and the result is a mix between our musical compositions, mostly improvised on the spot, the sounds of the sea and the wind, and the “resonance” of the individual bunkers. Video editing was entrusted to our excellent video maker, Manfredo Gigante.

You have therefore created art in a place where once hate and death was generated!

Definitely. But we also wanted to demonstrate that there are such crazy human works that even the earth retracts in front of the horror generated by them. Over the decades, the Danish Atlantic coast has “retreated” a few metres, crushing the foundations of these bunkers, which now lie poured down in the sand. In some cases, they are completely buried and in others, they are slowly submerged by the sea. It felt like the horrified land was receding and the natural elements are trying to hide and destroy these human atrocities.

The Atlantic Wall is the past that lingers on and reminds us of the filth of which the human race is capable. The EFFTER have always been interested in the roots of violence, right?

The project has absolutely nothing to do with any political ideology: it was born randomly, from a journey that led me to the discovery of these structures, but with EFFTER we have always dealt with issues concerning human madness, speaking of cases of psychological deviation to the point of leading to criminology. We have always had a profound interest in what appears to us like a great eternal mystery: what makes a human being hate, kill, and above all find pleasure in doing so?

Obviously, the work carried out both through the music of EFFTER and the Blockhaus project does not exalt evil …

Absolutely, it doesn’t. We are interested in understanding and showing the reasons that lead to hatred because we love life, beauty, art. We transform the worst wounds on the planet, like pain and evil, into forms of art and by doing so we exorcise them instead of becoming victims of them! 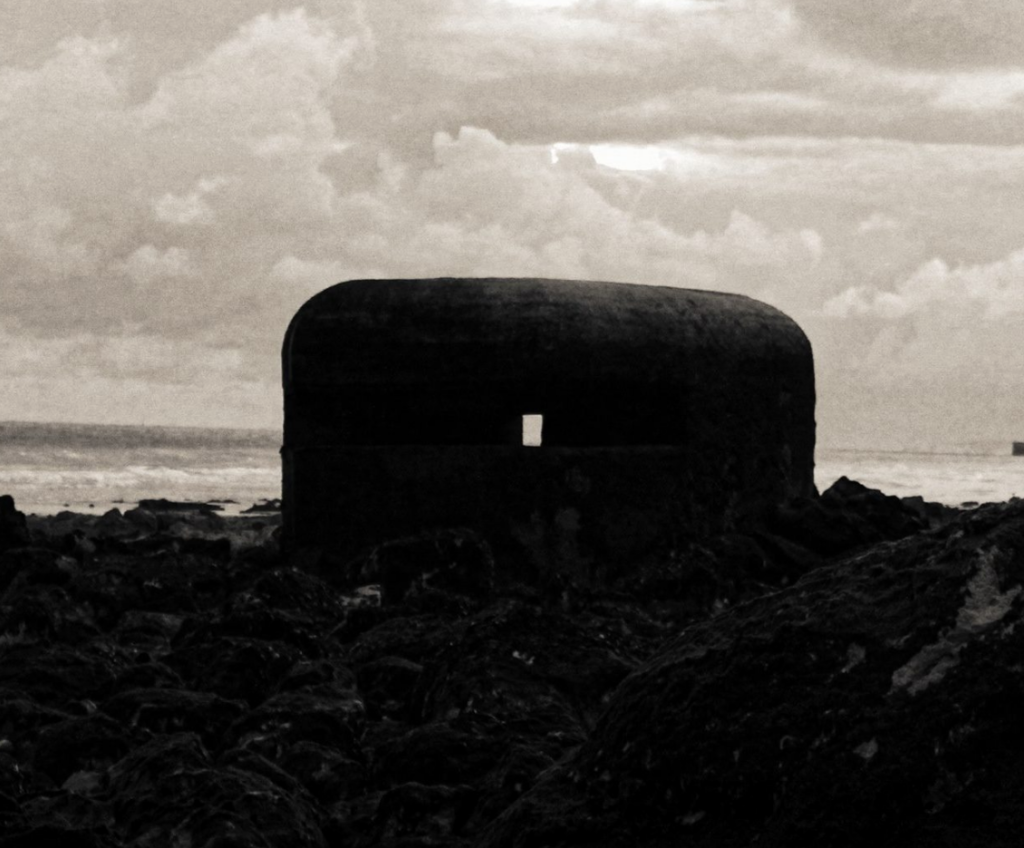 In front of the bunkers, however, something struck you, right?

Before the trip to Denmark, we focused on the roots of human hate and violence. What pushes a human being to kill their own kind? In this process, nature is not affected in any way. In other words, if I hurt another man, the sea, a tree or a lawn do not horrify in front of this cruel action.

And instead, one of the most horrifying killers in the history of humanity, Adolf Hitler, ordered the construction of something that “moved” the feelings of apparently inanimate elements: the ground retreats, the sea tries to swallow them, the wind wants to break these bunkers.

Obviously, it is an artistic vision and, in some way, it is a philosophical translation. It is clear that Nazism, like all extremists, has done much more horrors than building a series of bunkers.

I think this project is particularly relevant in this historical moment, even if it is not dictated by any political ideology …

George Santayana said that those who do not know history are doomed to repeat it. It seems to me that this is happening right now: a lot of memory has been lost and I don’t see a great will to find it again. Many horrors of the past are happening again, from an increasingly accentuated racial hatred to the raising of barriers. We hoped for unity and peace after the horror of wars and totalitarian regimes, and instead, something is taking us back. I hope I’m wrong…

With BLOCKAHUS, do you want to send an environmental message too?

Technically not, this type of message is not our main goal. Blockhaus does not aim to raise public awareness of environmental protection. Having said this, however, there is a sentence at the beginning of the Blockhaus video that says: “a horror so big that even the ground recedes before it” and that can be easily interpreted even as an environmental statement. Humankind seems to be devoted to self-destruction: they destroy their environment, their home. The bunkers in question, however, speaking under the aspect of environmental impact, are tiny crumbs compared to deforestation, pollution, etc.

No light at the end of the … bunker, then?

We felt several types of sensations inside the bunkers. You feel the same when you see them from afar when you walk by or touch them. The discomfort and the air filled with negative energy were surely the most recurrent emotions, but I would be lying if I said I had not perceived something “beautiful”.

First of all, on most of these beaches in Denmark, there is an unreal peace with hypnotic contours. You can sit in the centre of one of these oppressive rooms and you are almost completely in the dark, with the incessant noise of the sea, while the wind is creating very disturbing sounds, passing between the bunker tunnels. Meanwhile, you might think of what must have happened in these bunkers, of the hundreds of ruthless men, or frightened folks, or subjected to the control of madness. Or … you might not think of anything, just stand still and listen. Contemplate. These emotions are very difficult to describe. In some instances, then, we sort of reached the “Sublime” in the moments when we played inside the bunkers. An almost transcendental experience … but it’s so difficult to define it!

Are you planning to expand the Blockhaus project? Maybe towards new borders?

Normandy is our next stop.

This part of France, in addition to incredibly beautiful, is notoriously the richest in bunkers, due to its proximity to one of the largest nations that were enemies of Nazism: England. You can see the White Cliffs of Dover because the stretch of sea that separates the two coasts is very small.

From 23 to 30 August 2019, Alessandro and I will travel along the entire coastline between Dunkerque and “Omaha beach”, the D-Day’s well-known stage.

Our ultimate ambition is to make Blockhaus a complete work, including every part of the Atlantic Wall, from northern Norway to the last coasts of Normandy. We would have loved to do it in a logical and continuous manner so to speak, but it is very difficult in terms of logistics and costs. Therefore, we need to explore the areas of the Wall in random order, depending on the budget and our availability.

Last, but not least – this is a very important question: what does travelling mean to you?

I consider travelling the highest form of freedom, enrichment and well-being. I am looking for discovery and experience. The depth of the emotions I feel during a journey is such that very often I literally forget to eat (Editor’s Note: lucky you!). Moreover, I am rarely tired, except at the end of the day, after hours and hours of walking. The distance is never enough for me, and I enjoy every single step of the journey.

As a musician and lover of various forms of art, travelling is also essential to learn, explore, understand, find new inspiration, and observe everything from different angles. Basically, travelling is of vital importance on a physical, intellectual and spiritual level. It is always a total and enveloping experience.

Dear Skandorini, would you like to find out more about the Blockhaus project? Here are some online resources.