The main character of one of my favourite books by one of my favourite Italian writers, at some stage, wonders: “What is it that we are waiting for?”. As most of my Italian friends do not exactly love this author, I will spare them the joy of reporting his answer. I think that waiting is good if you are lazy and a bit superficial. After all these years filled with sunshine, salt, bitterness and shining smiles, I have come to tell myself that it is immensely more satisfactory to get your ass up from that chair and go and get what you want. If you think of it, moreover, where do we usually wait? We wait in hospitals, in train stations where your train is late, at your GP’s, at your dentist, at your architect: useless and a bit tiring places.

Life shines a bit brighter when you decide that time has come to get up from that couch (real or metaphorical) to get yourself a new adventure. I learnt that it is dangerous to wait for huge and eternal events to happen, and that nothing stays forever, above all people. I learnt that moments are what fill up your heart, and that happiness is a bit of a limping concept. This Danish adventure, for me, has been something I looked for. One of the book characters that filled my adolescence with hope, at some stage, prompts one of his friends by saying: “Sometimes we must jump out of the circle they have drawn around us”. It had become too easy to sit on that couch, looking at a marvelous sky that had started to show the same old colours again and again.

Over the last few weeks, I have had a ball. The first thing I would like to write about is the visit Mr. Kangaroo paid me from my former Hibernialand. We went to Copenhagen, and straight away I feel your fear I would speak about the Little Mermaid. Fear not, my readers: I get the feeling that everybody goes there only to be able to be disappointed by its size and its ugliness. After a few hours of architectural wonders, Mr Kangaroo and I went to a sand sculpture contest floating in front of the Opera House. I am not creative: I cannot make anything, I can barely cook and I definitely cannot paint or sew. Therefore, when I witness such sorts of creativity I get somehow stupid and what New Age call “Inner Child” awakes again within me. I usually manage to keep the kid quiet, thank goodness.

The Sand Sculpture Contest showcased works by an international pool of artists: some created a Viking, some aliens, some a true to reality version of Copenhagen and some opted for mythological – ethereal figures, such as the Bunny Man. Although all these statues were made by shaping sand, I thought that the sea was there staring at you. A ghastly breeze should have created a sand storm that should have dissolved that anthropomorphized Nature.

Nothing similar happened: those works by who flies with the only power of fantasy looked incredibly solid, but at the same time weightless. Dumas said once that art needs solitude or misery or passion; it is a rock-flower flourishing by stormy blasts in stony soil. While walking among those strange characters, I felt everything was there: passionate hands coming from all corners of the world to shape their dreams (or nightmares?) into an ephemeral reality; the subtle poverty of the material used to make these figures; the harsh wind battering against the other worlds depicted, and a stony soil surrounded by Copenhagen traffic.

With Mr Kangaroo we then moved to Tivoli which is the amusement park of the Danish capital city. I basically spent the whole time with my eyes shut, and screaming so loud that the kiddies on the fairs with us looked at me thinking “You are simply embarrassing us” and “These are not scary funfairs, c’mon get a grip”. My friend was as brave as ever, and decided to go on one of the most terrifying fairs I have ever seen in my whole life, and I kept on screaming while he was shot up the sky with his feet hanging out in the void. The only funfair I love with all heart is Life itself, days passing by and modifying you without you even noticing their power. Tivoli is drenched with the smell of an epoch that does not exist anymore, and is adorned by white peacocks that shrieked everywhere.

Tivoli is wonderful, but I could not help but being terrified and a bit sick by its roller coasters. The amusement park host a good variety of restaurants and bar and following one precious advice from one cool Danish colleague, I had managed to book a table at the Brothers Price’s restaurants: Adam and James opened their gourmet’s dream at the Glassalen that was intended to be used as a concert hall, but then became a place where people could enjoy another pleasure of that funfair called Life, i.e. food. The atmosphere, the eye-glassed waiter indulging us with fantastic wine, the Harlequin symbol of the restaurant, my virtual love story with one of the chefs (where by “virtual” I mean “only real within my skull”), and then the jazz concert outside the restaurant. I felt complete, balanced, like it can only happen during special journeys. Pity that one of jazz singers looked like a porn-actor, but that’s another story.

The following day we went to the Island of Orø on the fjord of Ise, where there are only 850 inhabitants on 14 square kilometers. The island is linked to the rest of the Sjælland by a yellow ferry boat that in our case was driven by a bearded blonde sailor. Orø has a small church dating back to the 12th century and has a small graveyard. Now, I am neither a necrophile, nor a gothic person, but as I told at the beginning of these Danish Chronicles, cemeteries in Denmark are special. It feels like the ones who are gone before us could really get some rest here, if only eternity existed. Every tomb has that touching “tak for alt”, and some are lifted from the void of death by the company provided by small china animals, fairies, ladybirds. You hope that the ones who are resting, underneath your feet, will feel a bit less alone with all these little friends around.
Mr Kangaroo left after the day after Orø. I am not a fan of goodbyes at airports. Goodbyes at airports suck. You are in a rush, your stomach hurts a bit, your drop your flight tickets while you try to keep your act together and you try to avoid saying that you are sorry that they are leaving. You know you’ll see them again soon, that’s what friends do, but you feel really pissed off because people do not come back and you curse yourself because you haven’t hugged them as tight as you meant. But this is another story.

Another weekend. Another part of Denmark. I beat all my personal records: I drove 800 kilometers over 48 hours. I drove on one of the most amazing roads I have ever seen in my life. Sjælland, which is the island where my current city lies, and Fyn are made apart by what modest Danes call “The Little Belt”. When you travel everything is new, and I tend to feel delightfully off-centered when I am not sitting on my couch having a cup of tea, but I arrived in front of the bridge that links these two parts of Denmark I felt moved. Inside. The Belt is a 50-km-long sound, and that bridge is shiny and strong. Jesus walked on water, I drove on it while the radio was broadcasting one song that has been accompanying me during these Danish weeks

Sometime life gets a freaking magic turn: sometimes it breaks you only to get you to work better than before. My first stop after the Little Belt was Odense, which is the Andersen’s birthplace city. It could well be that fairytales are not really my first choice of literature, but I did not spend too much time there. I indulged a bit longer in one of its squares in front of a statue of a huge naked figure opposite to a huge cathedral whose saint I deliberately chose to learn. From Odense I went on to Esbjerg on the Jutland peninsula. This is my itinerary: 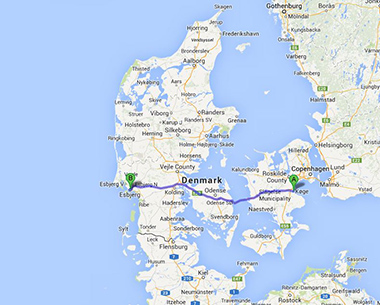 Ribe was my next stop. It is supposed to be the oldest village of the whole Denmark. There, I felt that someone was following me among crooked houses. Mr Meow was my guide on Ribe’s cozy streets, and I wished that lovely cat could have come home with me. Soft, reliable, squeezing his face on cathedral doors. Mr Meow could have my perfect partner.
I had a great time in Jutland: Esbjerg is famous for some gigantic statues that salute the Sea, but the best bit was when I finally got to the B&B I would spend the night at. The owners welcomed me with a cup of coffee, chocolate biscuits and shiny smiles. Their place was not your traditional B&B: it used to be their farm, but due to the building boom they had to stop the agricultural approach to life, and converted the place to a safe harbour for those who, like me, are travelling around the area. The price for the night was excellent (for Denmark), but I guess I’d pay a million euros to have the time to spend another few nights there: a billiard room, a mini-spa, three dogs, enormous communal rooms. (http://www.urups-bed-and-breakfast.dk/).

Afterwards, I went to Blåvandshuk (such an easy word to pronounce, don’t you think?). A few minutes after getting there, I thought my Sat Nav had gone bananas as I was surrounded by cars with German registration plates (and Germany is just there, on the other side of the border, after all). I shook the idea off by going walking on a beach where I could also pick shells where I was accompanied by a little dog chewing up my heels. For a moment, I fear my new runners would explode again like the previous pair. The wind was so strong that, instead of kites, people could fly kids. It was electrifying to be there. Sometimes I wonder if my nervous system is not damaged, because I thought I could hear a song whose author is unknown to me, but is sweet and electric and happy:

I looked around me, and there was no one except me and the Nordic Sea.