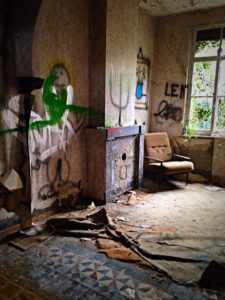 Metropoles usually make news. Social clashes in their squares, their heated citizens dissatisfaction, the art exhibitions opening in their museum: these are the topics that appear on the front pages of global newspapers.

I am sure, however, that the world daily evolves in the markets, schools and streets of small realities. This aspect is often what I am looking for in the travels.

This microscopic Flemish village is going through an irreversible involution.

Doel will simply disappear: it will be soon phagocytised by the pinging port of Antwerp, which is crushing it on one side, while an irritating nuclear powerhouse continuously covers its sky from the other.

They told us: “Leave”

Until the end of the Seventies, about 1300 people lived here.

I can still see the happiest and sweetest aspects of their lives, when I get here in January 2017: picnic tables, slides and swings in the playgrounds, a restaurant sign, “come in, try our sandwiches, they are the best in the whole province of Antwerp”. 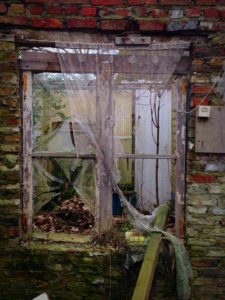 However, shadows are descending around me: I scratch my arms in brambles that now inhabit all Doel’s walls. I move them over and in front of me verandas appear, covered with cobwebs, broken velvet chairs, unshielded televisions, shattered cups and dishes in abandoned kitchens where no noise can be heard any longer, sofa seatbacks transformed into beds by stray cats.

The shadows continue to climb to the roofs. They become immense and unmanageable, as the former inhabitants’ voices grow in my ears. They loved, cried, went shopping in Doel: “They told us we had to go away, they shouted that that this was no longer our house”.

The movement is not due to a war, for once.

The entire area was purchased by a company called LSO. They initiated a forced abandonment procedure for residents of the village. In a near horrifying future, Doel will become sea. It will become a new piece of the port of Antwerp. Goliath swallows David, in this Belgian version of the biblical tale. 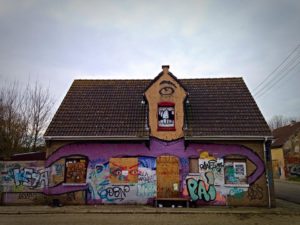 She is holding balloons in her hands

She is cute and blond. She is standing there, a few feet from me and holds ten balloons in her hand. I cannot understand where she came from. Is this little girl real, or is she just another one of the innumerable ghosts walking with me in the streets of Doel?

Then she says something in Flemish to someone approaching me from the back.

“I am her mom” she tells me. She is wearing a dress that is too light for Belgian winter temperatures. I would like to ask her if she is not cold, but maybe she is a spectre and the spirits do not have these problems.

“Doel is a perfect photographic set,” she says, “with all these graffiti.”

They disappear and it takes me a while before I realise it. 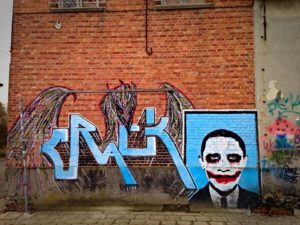 In this pre-death limbo, Doel was temporarily reinvented.

It has become an enormous canvas thanks to the work of many street art artists who, through their work, have given these relics another last life: gigantic animals, aliens and rats, a lying ox, a bloodied Barack Obama, a house with eyes and gloomy teeth, a cartoon bubble saying “All my friends are dead,” a gigantic gorilla holding a bunch of flowers, and an eye that reminds Dali’s work is looking at me from a gate that is as barred as the future of Doel.

How long does the impact of man live on in inhabited places? How many years will pass before all of this disappears under the inexorable hunt of the world economy?

The joker is smiling, but .. how long for?