Faravahar. Ahura Mazda. The Towers of Silence. Zarathustra, or Zoroaster, or Zardusht. Mazdeism, Vohu Mano and Ahem Nano. The Fire Temples. These far-fetched terms resound in my mind while I am trying to put together this new short story. This lexicon is simultaneously disconnected from my usual linguistic acquaintances, and vivid, colourful and deeply-rooted in my memories. I wish I could stop time or dedicate it to something I really care about instead of running on a never-stopping treadmill and watching the best part of my life slipping through my hands: my travels.

When you say “Iran”, people usually think “Islam”. They rhyme, too, one can argue. Instead, before Muhammad, Jesus & Co. it was the time of Zoroaster. Yes, Nietzsche’s guy – the one that thus spoke. You know him, don’t you? Furthermore, do you remember the Magi? According to tradition, they were Zoroastrian priests.

I close my eyes and I know that a part of me will always be there, on top of the Towers of Silence (or Dakhma) a few kilometres from Yadz. The land around me was barren, dotted with a few gracious travellers. A hole in the middle of what once were walls that protected this place of farewells. Zoroastrians believe in the purity of the elements: thus, instead of burying their loved ones (and by doing so, poisoning the soil), or cremate them (and by doing so, contaminating the air), they once laid their Faithful Departed on top of these hills, and left them to the vultures. The Persian emperors as Darius, Cyrus, Xerxes and Artaxerxes, as Zoroastrians, were pulped by vultures before being buried in their tombs in Persepolis and Naqs-i-Rustam. Is a Christian conscience, charged with many a taboo about death, tossing and turning at such a thought? 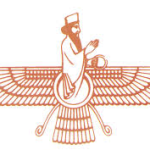 Whatever form they might take, to me, graveyards are just places of melancholic serenity. Memento mori is written on some of our cemeteries. Carpe diem, or in modern language run kid run, life may slit your face when you least expect it. Instead, around the Towers of Silence I saw the winged figure of Fravashi: it is the guardian spirit symbolizing Frahavar which is the part of the soul that will reunite with Ahura Mazda after death. The first time I saw a Fravashi, I did not even understand what it was. It looked like a bearded little man with two thin legs and two tiny feet perched on two large layered wings. I was right about one thing only on my initial ignorant interpretation: the wings are divided into layers and they represent purity of speech, action and thought. Those that had seemed to be fragile legs are actually two strings: the first is the symbol of Darkness, while the other stands for Goodness. In between them, a tail points forward, and represents the Evil Deeds. The little human head that I initially thought was a man, was instead the image of Wisdom and Experience. He holds in his left hand a ring to symbolize Unity, while his right arm points at the sky to indicate his devotion to the Divine. In the middle, between the head and the tail, there is another ring that illustrates our Actions and Eternity. Fravashi, will you accept my apologies? I did not understand anything about you the first time we met: so many things to learn, so much time wasted on things I could not care less about.

That day was one of the most important ones of my journey in Iran. From up there, I observed the new Zoroastrian cemetery. It is closed to those who do not believe in Ahura Mazda and is where believers are nowadays buried in graves that are walled in concrete to prevent the desecration of the soil. The Towers of Silence are now completely mute: the tradition was prohibited during the 1979 Revolution, or maybe just before that. In many cases, it’s been often difficult to find out official information here.

Ahura Mazda is never defined by symbols or icons, but he allegedly asked his followers to pray in front of the Light. The only source of light his first believers knew back then was the Fire that is still worshiped in temples dedicated to it. During my trip to Iran, I could visit only one of these incredible places: Ateshkadeh in Yadz. Its façade is anonymous and free of embellishments, and is reflected in the water of a circular pool. Inside it opens up into a large room where special rituals are celebrated. In the atashgah, behind a thick glass and in the midst of dozens of worshippers, I looked at the Sacred Flame Perpetua that has allegedly burnt since 470 AD, fuelled mainly by almond and apricot wood.

I’d like to continue with a little game, dear readers. According to you, who stated the following sentences for the first time?

For those who live in a Christian society, one might say: “Jesus.” The correct answer is “Jesus did, too“, but before him, these were just some of the key concepts of Zoroastrianism. The religions of the world are, in my humble opinion, all valid and all traceable to a central idea: common sense. On days like these, blooded by crises and massacres, near and far, I wonder what turns the beauty of faith into pure murderous schizophrenia. We are not able to find the cure for cancer in a world technologically advanced enough to do it, but we cultivate an unstoppable desire for blood: we have massacred each other without shame, for millennia, hiding behind the name of this or that prophet. We are proud of dirty stupid wars. We break everything, we think it is possible to destroy everything and then rebuild everything all over again to destroy it again and again. From this website, I yell and I demand one thing only: peace.

In Fravashi, Goodness (Vohu Mano) and its inseparable twin, Darkness (Ahem Nano) coexist in Ahura Mazda, the Supreme God who created both of them. Often, in Iran, a lion fighting a bull can be seen carved in the rock or painted on walls: they represent this infinite struggle. This cosmic conflict reflects on humanity that has to choose a side. At the end of the Days, however, according to the Zoroastrians, Vohu Mano will win over Ahem Nano. The universe will be purified and the souls of all those who have chosen the Light will be redeemed and will live forever in the presence of the Ahura Madza.

Will this world of ours share the same lucky destiny? I hope so. Fravashi, put a good word for us and the children who will come. We badly need one.