At some point in your life, you will find yourself in Vienna. You will walk a lot while in the Austrian capital because most things to see will be within walking distance, even if public transport will be exceptional.

You will see the spiers of Santo Stefano Cathedral sprouting from afar, always. It is the symbol of the city. It will guide you. However, right on Stephansplatz, you will find the light underground. Yes, underground. You will take the escalators that lead to the metro station which takes its name from the square. And you will arrive at the Chapel of Saint Virgil. 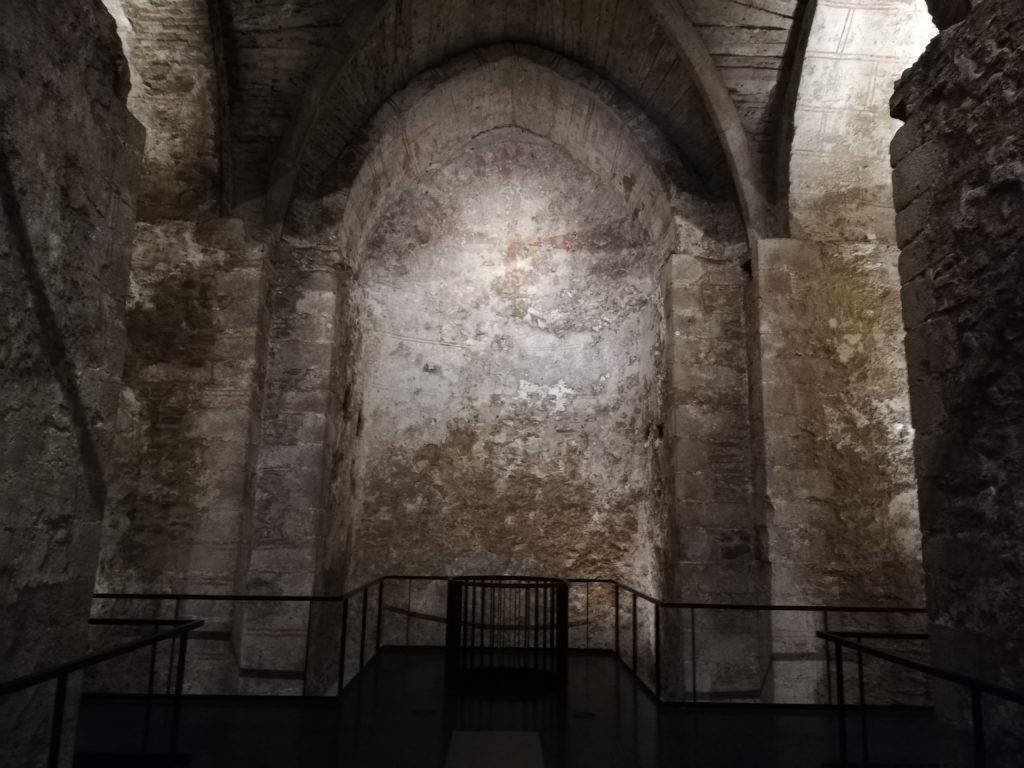 The light, underground.
They discover it in 1973, while they are integrating the U1 / U3 subway lines. In your opinion, what did they do when they found themselves in front of this underground chapel? What did they say before this Gothic splendour? I can tell you what I felt if you want.

I am the first visitor in the afternoon. The ticket clerk is kind and smiling. He says to me: “Go down the black staircase to your left and enjoy the visit.” I walk through a glass door and in front of me there are walls dating back to the thirteenth century: the Chapel was in fact initially built between 1220 and 1230.

I find myself thinking about how many people have passed through here before me: not only from 1973 onwards. Before, I mean before this modern civilization, before my days, before this century. How many people came here before me and prayed, thanked, smiled and cried under these granite vaults? The chapel is in absolute silence, the sounds of the subway and tourists who crowd the shops and streets of Vienna also disappear down here. 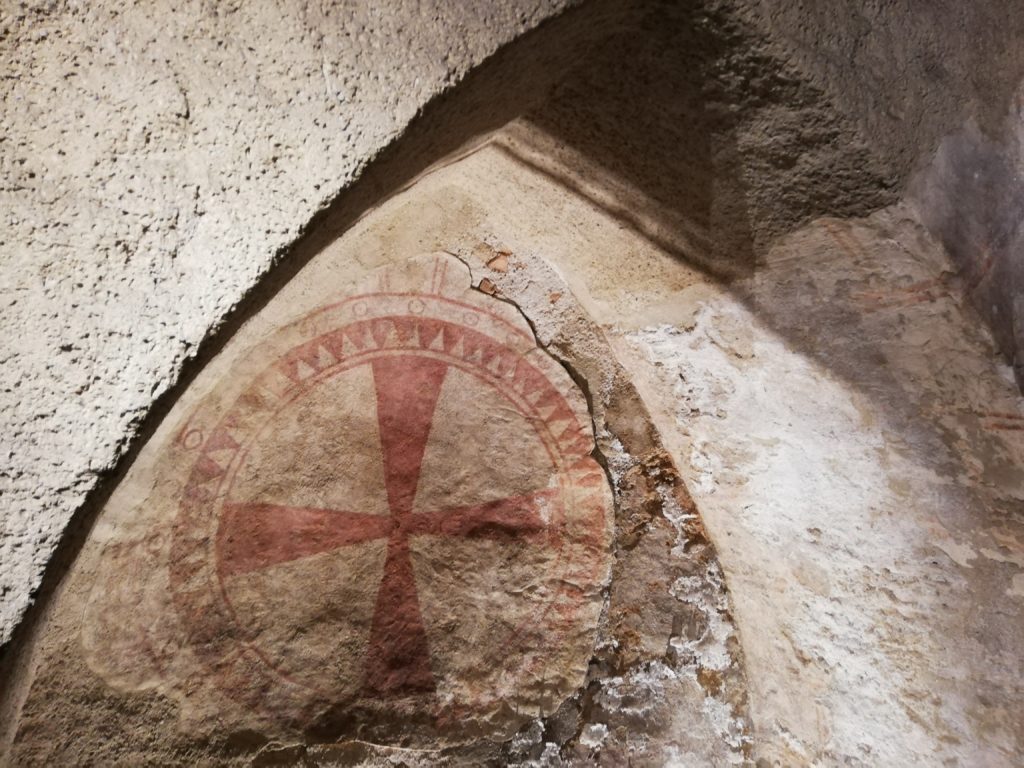 Around 1246, someone decorates it with wall paintings and solar crosses in the niches. I find myself observing them over and over again during my visit. The first is on the wall at the beginning of the staircase: it is so close that it would be possible to touch it, and by doing so, I could erase the physical distance between me and the painter who put it there. You don’t do these things, though! Some of the solar crosses are brighter than the others: the red with which they were designed is a little stronger, a little more defined. The same shade was also used to draw very large bricks in the niches. The artist could not have known it that he’d become immortal with two brush strokes.

Better and better!
The history of the chapel is neither clear nor simple, especially for someone like me: sometimes I wonder if I really studied history in high school and while I was at university, because certain names, certain events, certain battles have completely disappeared from my memory.

These walls are linked to a duke (evidently) important in the thirteenth century in Vienna: Frederick II of Babenberg called the Warlike (Never. Heard. Of. Him. Before. Ever). He would have erected the chapel as a crypt for San Colman di Stockerau. (Never. Heard. Of. Him. Before. Better and better!). He should have then become the patron of the diocese of Vienna. Too bad that the name of this Chapel is nowhere to be found in historical documents. 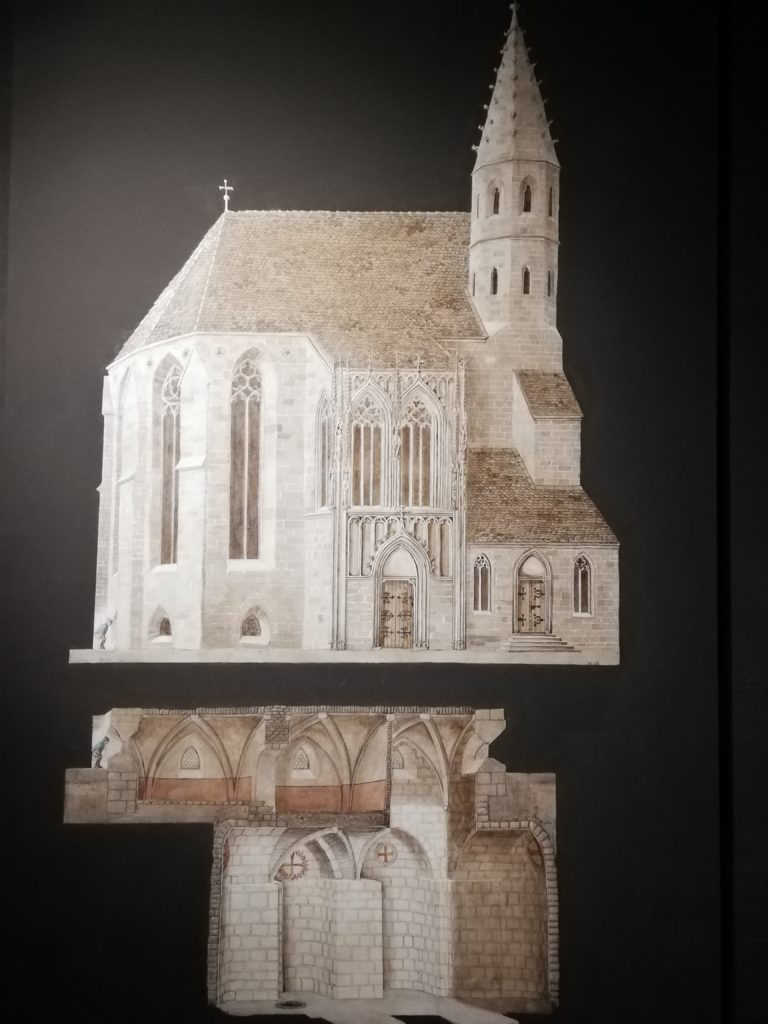 In the fourteenth century, then, some documents mention a funeral chapel of an (obviously) influential Viennese family (whose name I don’t even tell you because maybe you’re like me and at the end of the article you don’t even know what your name is anymore). The important thing is that you remember here that these sources talk about one or more altars, one of which was dedicated to St. Virgil of Salzburg. This is where the name comes from.

But it doesn’t end there. In the Middle Ages, the Saint Stephen’s Cathedral was surrounded by a large cemetery where there was the small church dedicated to Saint Mary Magdalene (come on, I am sure you can remember this name). It was used for requiems and minor functions, but no longer exists because it burned down at the end of the 1700s. Virgil Chapel was located just below Magdalene’s and the two buildings were connected – apparently – by a vertical well. Why? Nobody knows.

Other documents put forward the hypothesis that it was also used as an ossuary at some point, but I would stop here because I think I have shown you that very little of this chapel is demonstrable.

Virgil who?
He was an Irishman, among other things.
He was an expert in Earth measurements. Contrary to what is believed today (especially in reference to the story of Christopher Columbus), in the Middle Ages Earth is not considered a flat disk at all.