I am not interested in their god. They are all part of an eternal movement: they come and go. Under my vaults, however, they think of themselves as immortal. They ingratiate a probably empty sky by joining hands, by studying the Talmud, by confessing their misdeeds. Some would kneel. Others would stand, observantly. Some would beat their chests, they would light the candles for Hanukkah, they would fast during the established periods. Established by whom, I wonder. Some would scatter flowers on the ground, out here on the cobblestones, on Corpus Christi Day. Humankind is retarded. 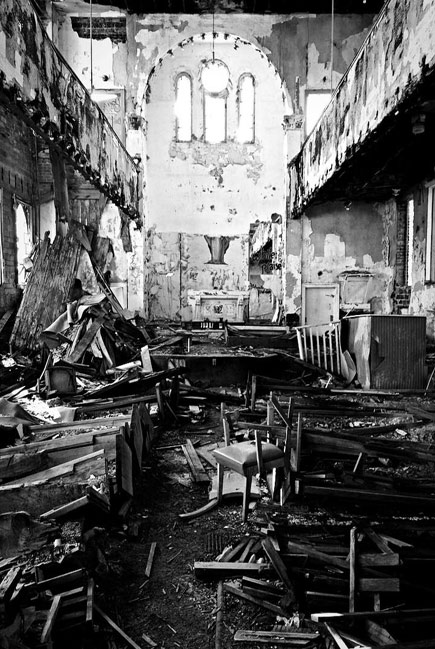 Thousands of them walked on this aisle. Only a couple of divine feet appear now on the wall. Some had hair as fair as Ukrainian golden wheat. Others observed the world through ebony African eyes.

I, the Concrete, have been protecting them all since 1912. I have never changed much since, like it or not.

I am not interested in their money. They are all part of an eternal movement: they come and go. Sitting on my benches, however, they think of themselves as omnipotent. Some come here walking. Some drive their precious cars to get to this place of faith. Their children visit Rabbi Isaac Stollman to learn the Talmud. Sometimes, I creak a bit louder to warn them that their great religious leader will move to Israel in 1965. They think it is the annoying wind, though. They feel omnipotent while many of them are just careless and confused.

I have often wondered who knew what was going on in the basement. The wind told me that the “Purple Gang” operated from down there. Criminals, offspring of lower-class immigrant. Russian-born Jews, so they say.

I, the Wood, felt their obscure vibrations coming from down there already in 1912. They have disappeared silently over time.

I stayed on, as unintended heritage, longer than their unprecedented violence and brutal actions. People has it that they were a shameless gang without colour. “Purple”, they were called, as rotten meat. Abe, Joe, Raymond and Isadore Bernstein stole loads of alcohol from other established gangs in Detroit. They would regularly kill everyone that crossed their bloodied paths. I bet they felt omnipotent when even Al Capone started to buy whiskey from them. Men, then, are all so alike: they end up killing each other, trust me. Shall I tell you about the Collingwood Manor Massacre?