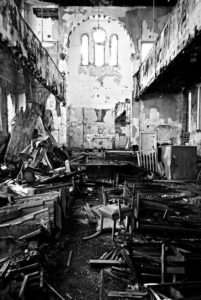 My favourite skirt
The first time I crossed his gaze was right in front of the foundations of this church. I still remember it: June 1920. Detroit fluttered on those summer days. It was my favourite skirt, the one I wore that afternoon. It was perhaps the only one I had brought with me from Belgium, escaping from the end of a trench war that had destroyed entire generations of my peers.
All those red poppies, mown down in the fields of Flanders.

“Ciao, sono Piero”
The first time I touched her hands was right here, in this church. They had built it up in less than six months. It was December. It was snowing. “Ik ben Anna,” she told me in Flemish. “Ciao, sono Piero,” I replied, guessing what she was saying to me. Under these now demolished vaults, around 400 faithful Catholics moved around us.
But we did not hear them anymore. 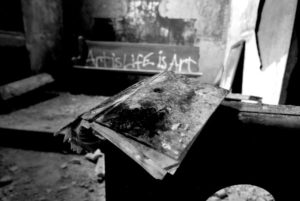 Ik ben Anna
The first time I touched his skin was right here in this church on the day of its inauguration: it was December 12th , 1920. “Ciao, sono Piero,” he told me in Italian. “Ik ben Anna,” I replied, trying to understand his words. In front of this now abandoned altar, around us gravitated Belgians, Italians, Hungarians, Slavs, the same faith.
We were certainly already elsewhere.

Breaking it all down to rebuild everything with our beautiful bricks
Our children went to the school that was built near this church between 1924 and 1927. They learnt a language that was not ours. Then, at home in the evenings we broke it all down to rebuild it with our splendid bricks: a little Italian, a bit of Flemish, a bit of American. We used these bricks to push away the nostalgia and tenderness for our countries where we were born and that we would never see again.
Another war loomed over them there, beyond the ocean that we had crossed clinging to a cardboard suitcase, with one skirt and one pair of shoes, on a ship where we were nothing but mice. 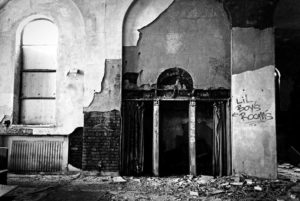 Along these aisles
Mice are the ones in power, now.
Along these aisles, which have received Catholic and Protestant prayers over the decades, the Dust now rules. All factories around here have been dismantled. Bishop DeCneudt, who came here directly from Ghent in 1939, is no longer there, like us, like many others who have sworn in eternal love in this church in a language that did not belong to them.
Mice dance here in the grungy confessionals.
Sins have vanished, like the musical instruments that were used in this church.