When I travel, I try to go and visit at least one market in the city or country that I have chosen as my destination. The stalls are comparable to a mine: if I travel alone, I sit down in a corner, I observe the encounters and clashes, I take time to look at how the exchanges take place not only of goods but also of people and customs. The daily life of the markets, the regularity with which they take place, the opening and closing times and days, the products that are sold according to seasonal rhythms, the scents and the colours that chase each other are a mirror of the society that animates them. To understand Helsinki better, we went to Vanha Kauppahalli several times.

If I look back at the first time we arrived at the Old Indoor Market in Eteläranta, near the southern pier of Helsinki’s harbour, I remember the clean air in the capital, the ferries leaving for the island-fortress of Suomenlinna and the warm sun that illuminated the Gulf of Finland.
Our careless and light smiles of the three of us, sitting in front of the Vanha Kauppahalli entrance appear in my memories too: we are at the beginning of a long journey and therefore we laugh in this impalpable Polaroid.

1888 is the date on the entrance of the Vanha Kauppahalli: it is the year in which they began to build it and then opened it in 1889, just a few decades later than those in southern Europe. Vanha Kauppahalli‘s activities continued with great difficulty until at least the 1950s: Finland had to go through the First World War, the Civil War of Independence between 1917 and 1918, the Winter Conflict between 1939 and 1940, and the Second World War, before catching its breath.

We experienced the Vanha Kauppahalli in peacetime, we were lucky: the red and white stripes decorating its entrance and its visitors, coming and going, welcomed us on that day in August 2019. That movement was almost hypnotic: dozens of people moved among its twenty and more counters offering food specialities from all over Finland and the world. 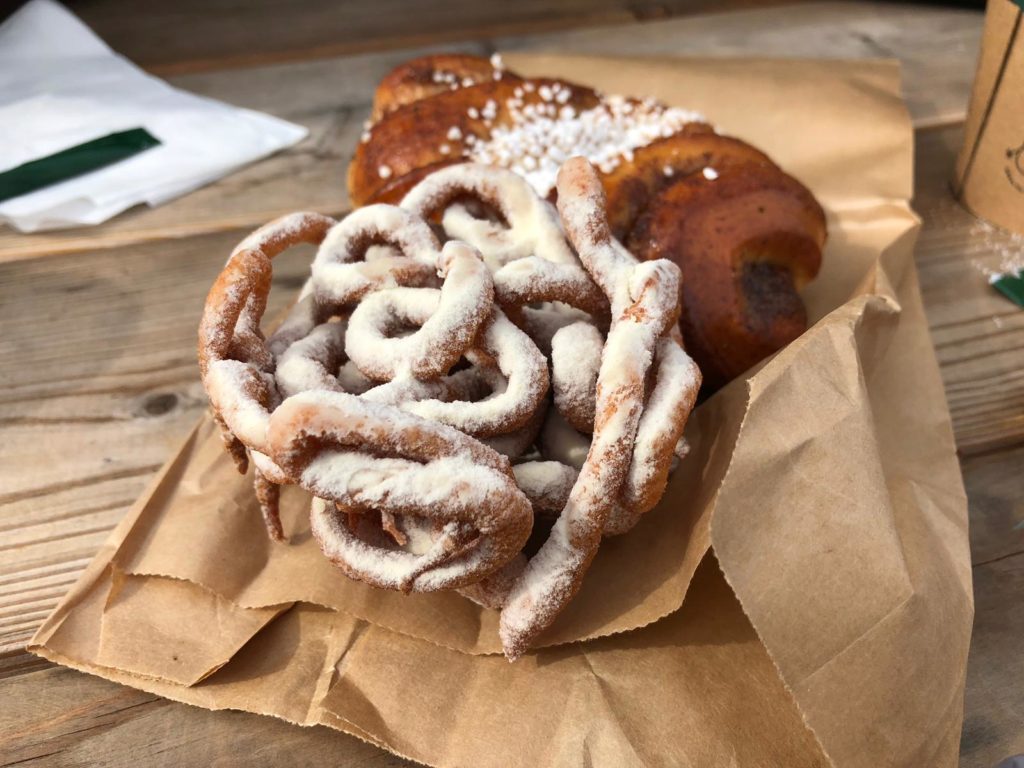 We walked its two corridors many times during our first visit. Our noses filled up with fragrances: from the smell of coffee and of cinnamon buns from Robert’s Coffee, which has the oldest shop of the whole city right inside the Indoor Market, to those of the Hanoi Vietnam restaurant, which has offered tastings of Vietnamese specialities such as Pho noddles soup for many years.

For the three of us, however, the Vanha Kauppahalli will always be tied to a particular merchant: at stand 20, at the end of the first corridor, near one of the cleanest bathrooms in the world history of toilets, we found Kalakauppa E. Eriksson. I can’t tell you exactly what made us stop and then return to this merchant over and over again during our trip to Finland. This fishmonger sells smoked, raw, fresh fish and shellfish. They come both from national seas and abroad. However, I don’t think his fresh products were the only source of attraction.

I think Juha Lindberg made us stop there.

Look at this sandwich, look at these shrimps and this salmon, check this out, how delicious that must be. The three of us are friends also because we love to eat, and we love being able to do it together. Doing it while travelling is one of those experiences that make the journey even more precious, after all. Sharing the food, the tastes, the colours of the dishes, let me taste it, getting your hands dirty, isn’t this delicious, spilling a little sauce on your shirt, wait here while I’m getting some napkins, copying what the residents purchase and buying the same dishes, I would eat another 25 of these sandwiches: all this is extremely important to me while I’m travelling.

We met Juha on the first day. He smiled as if we were friends already while asking us where we came from. He then approached the small table where we were eating our second (or third) sandwich standing. “Fantastic: you are Italians! So, in the next few weeks, we should go to the stadium together in Tampere: Finland will meet Italy for the World Cup qualifiers”, he said laughing.

We never went to the stadium together, but surely his comment now takes on a much deeper meaning: looking back now, in a world in total isolation where distances have returned to reign, I am a little moved by the beauty of such a simple social interaction, something so mundane that we have taken for granted for decades. 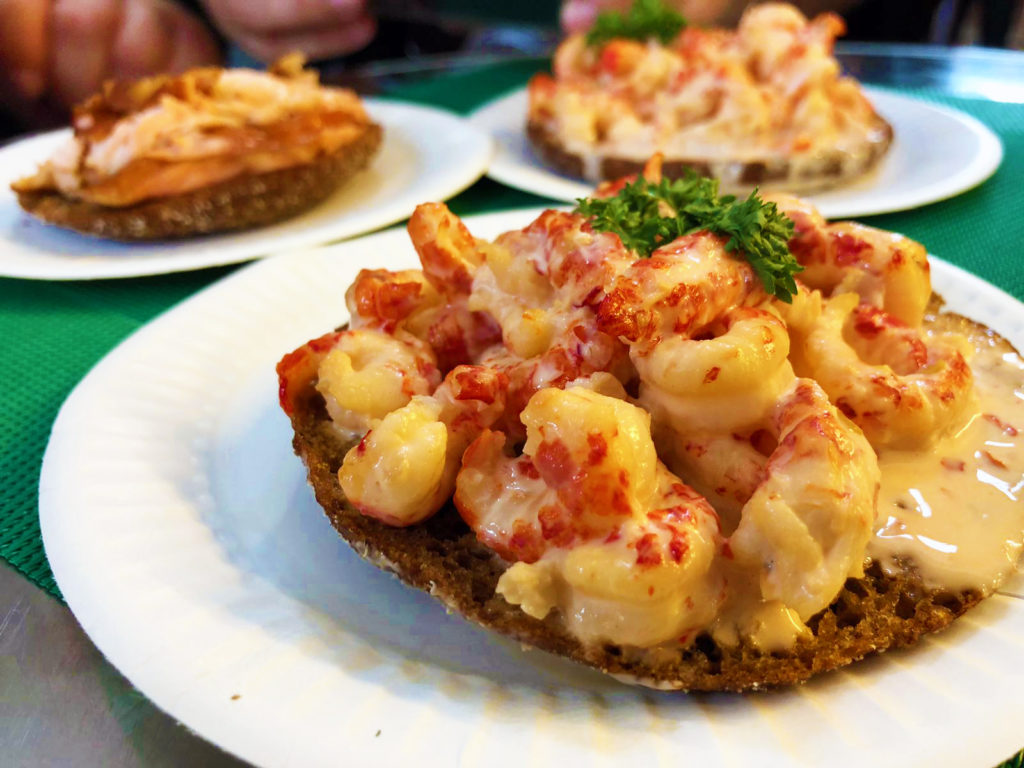 We also chatted with Juha on the second and third visits to Vanha Kauppahalli. He told us about his activity with the typical Scandinavian candour: without exaggeration, matter-of-factly. He explained the ingredients of his bestsellers: they call them skagen in Finland and Sweden and they are slices of rye bread topped up with various ingredients. Those prepared by Juha’s employees have various types of smoked salmon (with thyme, dill and so on), but for me, the best ones are those that have small fresh prawns seasoned in a sauce made of chilli, apple vinegar and a little bit of mayonnaise.

Simple recipes like this have always made me appreciate and look for street food, the one you can savour quickly, standing, sometimes on the sides of a busy street: simple recipes are tasty and nutritious, no need for show-biz in cooking. 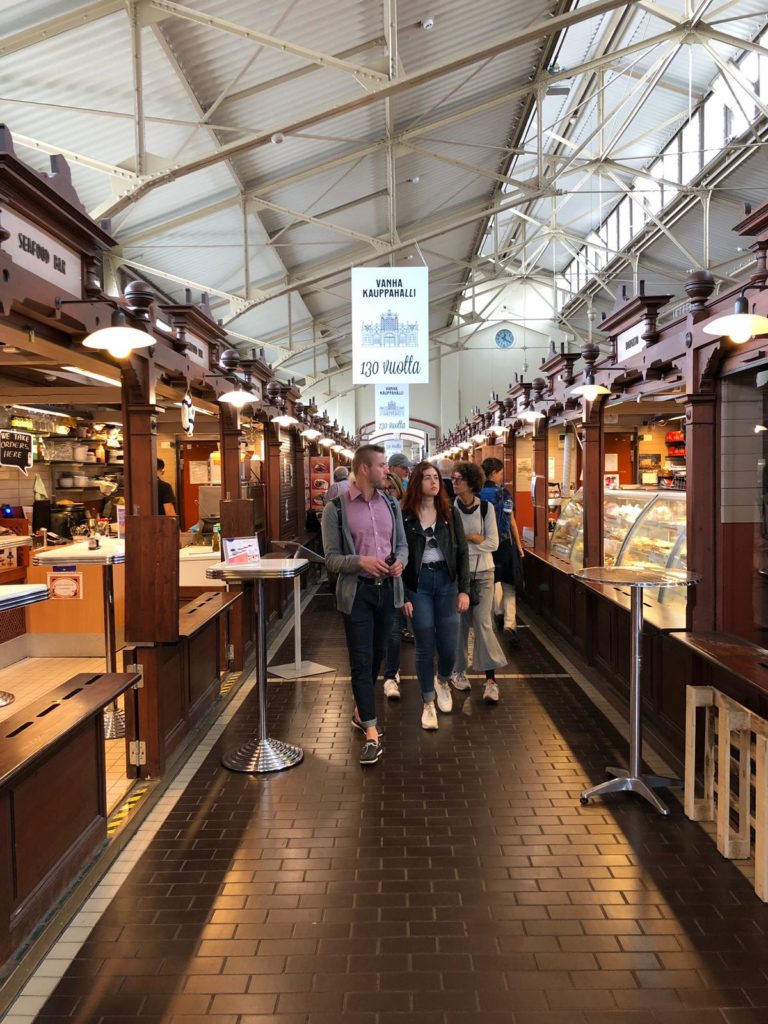 However, among all the conversations with Juha, the one that has stayed with me the longest in recent months has been the last one we had with him. We went to say goodbye (and to eat the last 25 skagen) on the day of our departure for Estonia.

– “We’re going to Tallinn for a few days”, we mumbled with our mouths full of shrimps and salmon.
– “Uh, Tallinn: you’re going to have a great time there. They are all more open and a little crazier than the Finns there, you will see”.
– “But Juha, like others we met, you spoke to us kindly and you smiled a lot in these weeks,” we said, spitting chilli sauce everywhere.
– “I am not a “normal” Finn. Mmmmh. Maybe I’m not normal, overall”, he commented, a little embarrassed.

I think normality is an absurd concept. It doesn’t exist. Points of view are by definition relative and variable and we all travel crazy and unstable trajectories. Travelling reminds me that nothing is fixed, absolute. The ways of doing, of behaving, of reacting, are changeable and infinite, and they are all plausible (apart from those that entail violence, of course). For me, a shy Finnish smile has the same value as an Italian hug and a skagen is worth as much as an Easter cake.

“Neither are we, don’t worry.”