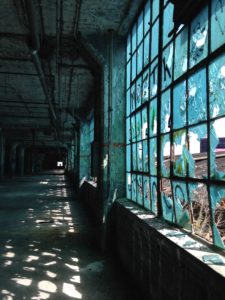 I was really happy
You know, I was really happy.
I had found work from Fisher, in Piquette Street, just a few steps from where Henry Ford had invented a new world with his cars.
I was part of a certainty: “Body by Fisher”, they used to say in those days to indicate durability and quality. We were highly specialised workers: we made the car bodies for Cadillac, Ford, Hudson and Studebaker.
We were the revolution.
I was really happy every morning as I entered this 6-story building. Natural light filtered from the outside. It reminded me of a giant greenhouse where our future flourished.
Every now and then, I still like to come back to the “Blue Room”: I stand in balance behind those celestial glasses and I walk on those tracks where we once moved the carts loaded of lead.
Those were golden years. 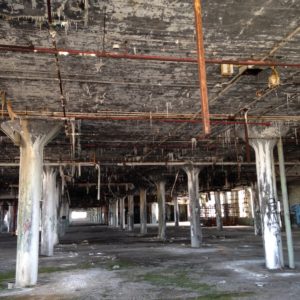 Blows and tanks
By the end of the 1920s, Fisher had merged with General Motors.
I remember our team leader and his harsh words: “Trust me, this is the end”.
I remember the beatings and the threats when we all participated in 1930 strikes, but then no: I do not remember much about that time, except the hollow sound of the police batons. They had been given the unwelcome task to getting us back to work.
The worst, however, was still to come: the Great War, the conversion of car production to tanks and airplanes, and the inexorable decline of the name Fisher. 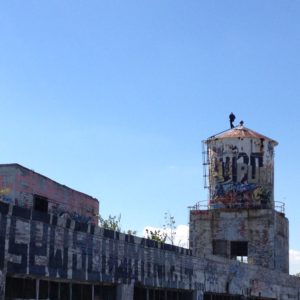 Contamination
I died on the closing day of the production line: April 1, 1984, fools’ day. Great joker, the destiny.
Nobody used to take any notice of strange coughs in those days. My lungs looked like a honeycomb.
That building that made me so happy was a trap loaded with asbestos, chromium, arsenic, lead. Nevertheless, I still come back here sometimes: I walk in the abandoned bins, where they mixed industrial paintings after my departure.
I pretend to drive the deck trucks that lie here and there, inert for decades.
I slide down from one of the many sections that collapsed every the years, like a kid, and I imagine seeing my son playing here and there.
At sunset, I sit on the water tower on the top floor. I pretend I am the guardian of this place that is slowly swallowed by nature, splashed by water and broken by ice.
I observe them from up here: some have spray cans and they come here to colour the opalescent walls of these 6 floors. Others come with cameras and try to stop something in their lenses that cannot be halted.