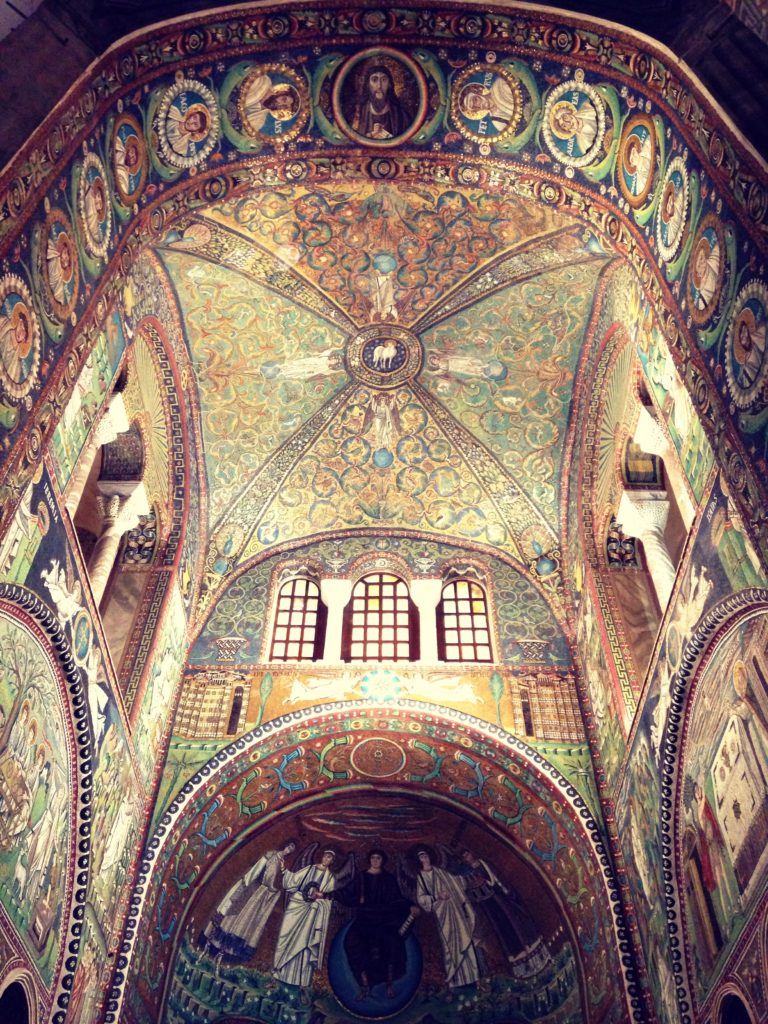 On the threshold, I am sure I stopped for a moment. The rain continued to fall behind me. My hands were frozen by this perpetual January. I pushed the door. The gatekeeper of San Vitale Basilica was standing beside a small heater.

It was dark inside, at the beginning. Everything was still, and yet I immediately felt something in my chest: a kind of breath. Like when you are in love, like when you feel immortal. I was almost afraid to walk along that two-story octagonal portico, arranged according to the golden section principle. It was as if I feared waking up the exedras, those big arches and the dome.

In a distant past, the basilica was covered with mosaics that infinitely multiplied the light that came in from different angles. Of those centuries, only the splendour of the apse and of the presbytery remains. While I was approaching them, the Breath grew, but it was not because of some sort of supernatural or religious force. It was Mankind, that’s what it was: it was the Genius of Humanity, the wisdom of earthly hands that had been able to build that mosaic grace, back then in the 6th century: a Byzantine sparkle that cancels the weight of the walls, celestial Jerusalem and Bethlehem, the sacrifices of Abel and Melchizedek, the court of the Emperor Justinian and his wife Theodora, hieratic figures, Baby Jesus, and the Three Wise Men. 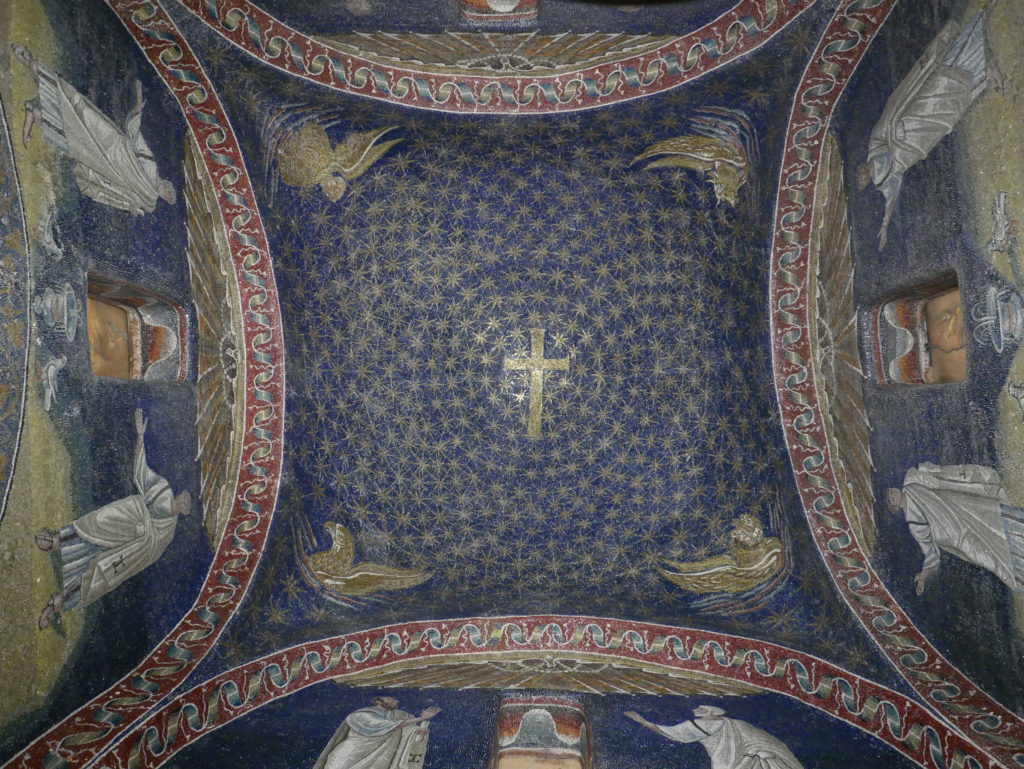 I almost ran in under those stylised flowers where Galla Placidia does not rest.
The sky was shaking, behind me. The gatekeeper smiled at me, “Welcome,” he said.
It was bright inside, at the beginning. Everything was moving fast, yet I immediately felt something in my head: a kind of anchor. Like when you stop asking, like when you feel comfortable.

I was not afraid to walk along those small walls of the mausoleum because 570 golden stars were watching over me. Since the 5th century, they have been gathering around the top of the cupola cap, occupied by a Latin cross. Looking up, the breath stabilised, but not for a mystic reason: it was Geometry, that’s what it was. The perfection of numbers, the regularity, the proportion and the comfort of the rational organisation, which was evoked in the 3 lunettes supporting the dome. The Apostles, St. Peter’s keys, the doves symbolising the Divine Grace, the Good Shepherd looking like Orpheus, and the windows that were covered with translucent alabaster slabs and were caressed again by the light. 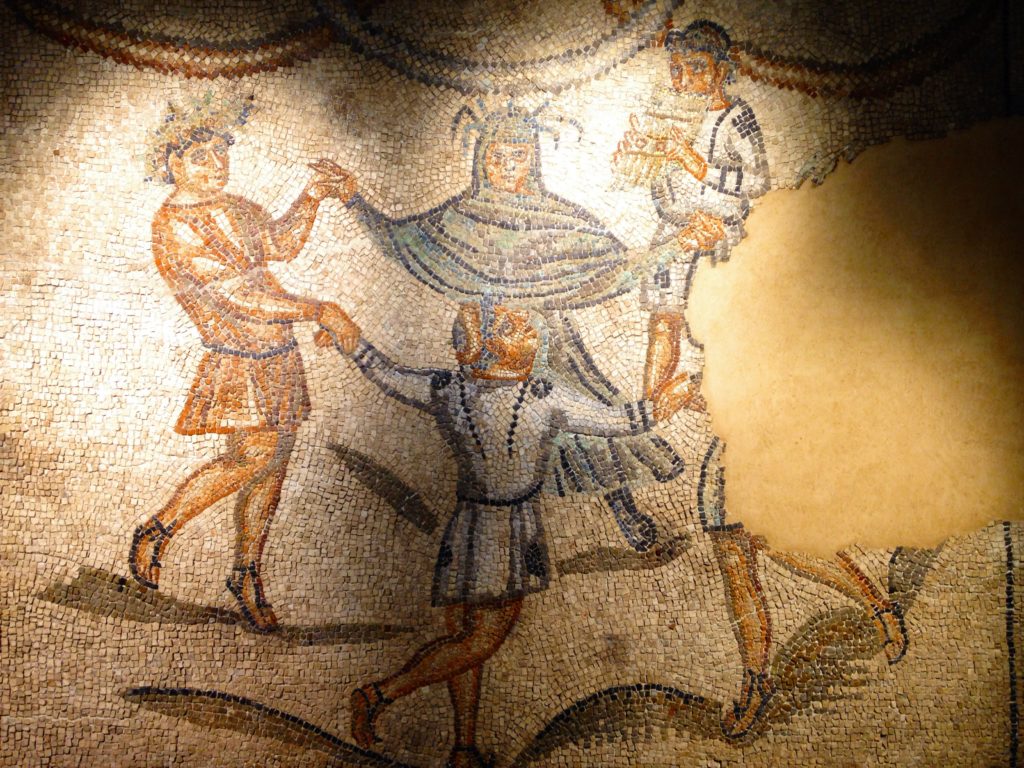 I felt stupidly envious, while I was entering those 700 square meters under Via D’Azeglio. The city was gone, behind me. Envious because I would have liked to be among those who, in 1993, were building some car parks and accidentally brought to light this Domus dei Tappeti di Pietra (i.e. House of the Stone Carpets), a place that was decorated with marble inlays and amazing mosaics from the Byzantine period.

It was unbelievable what I saw, inside. Still, I immediately felt some sort of warmth on my skin: a kind of summer. Like when you put on your sunglasses, like when you stop on a bench reading a book and you take off your jacket.

I could not stop walking around those mosaics. I also wanted to dance with the Genes of the Four Seasons: Spring, with its crown of roses; Autumn, with its pearl garment; Summer was mutilated in the upper part, but had a crown of spikes, and Winter completely wrapped in a green cloak, wearing warm babblers. I wanted to dance to the rhythm of the wind organ played by a fifth figure: we would have driven away the winter months, as Romans used to do. We would have taken the young Good Shepherd by the hand, without frightening the two fawns that accompanied him. 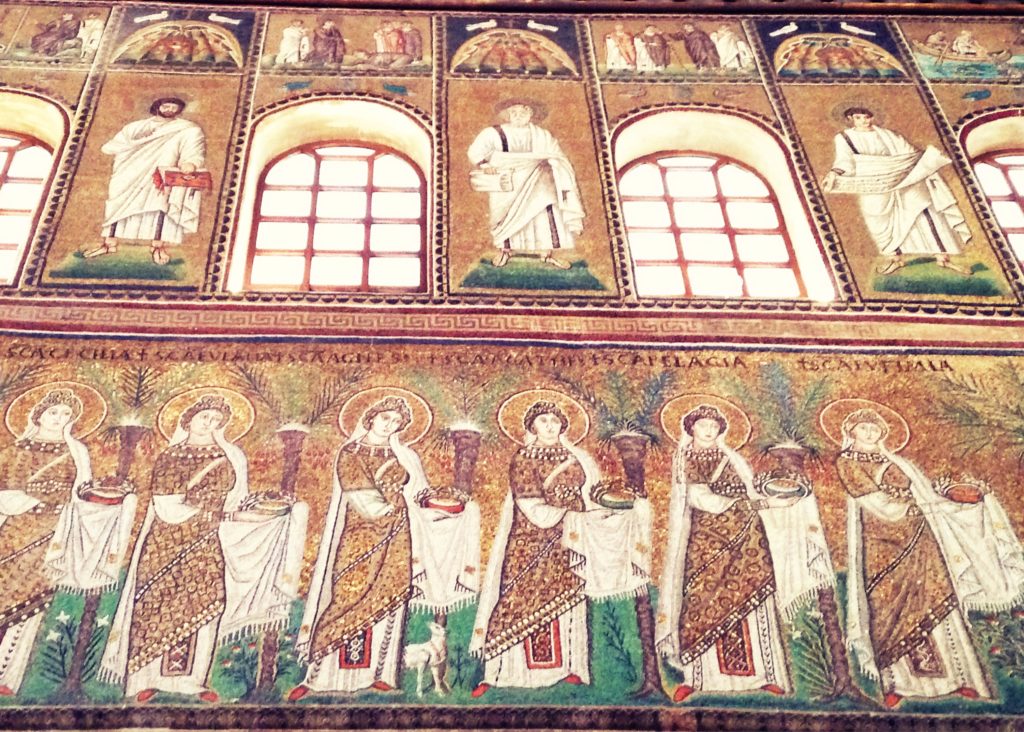 I hesitated for a moment after the first steps, under those processions. Even the explanations of a guide, behind me, had disappeared. I hesitated, and I felt tears filling my eyes: a kind of catharsis. Like when you understand that not everything is lost, like when you know that Art can save us.

I watched them walk, those martyrs and those virgins, up there on the walls of the cathedral of Sant’Apollinare Nuovo. Those repeated gestures, those precious clothes, that lack of volume, and those hieratic figures that march to the enthroned Christ without a support plane and that seem to float in space: here it is, the Art of Constantinople, which was Byzantium and then Istanbul. Here it is in Ravenna, the East that is reflected on the Adriatic on the opposite wall. Art brings in the catharsis, narrowing impossible distances. 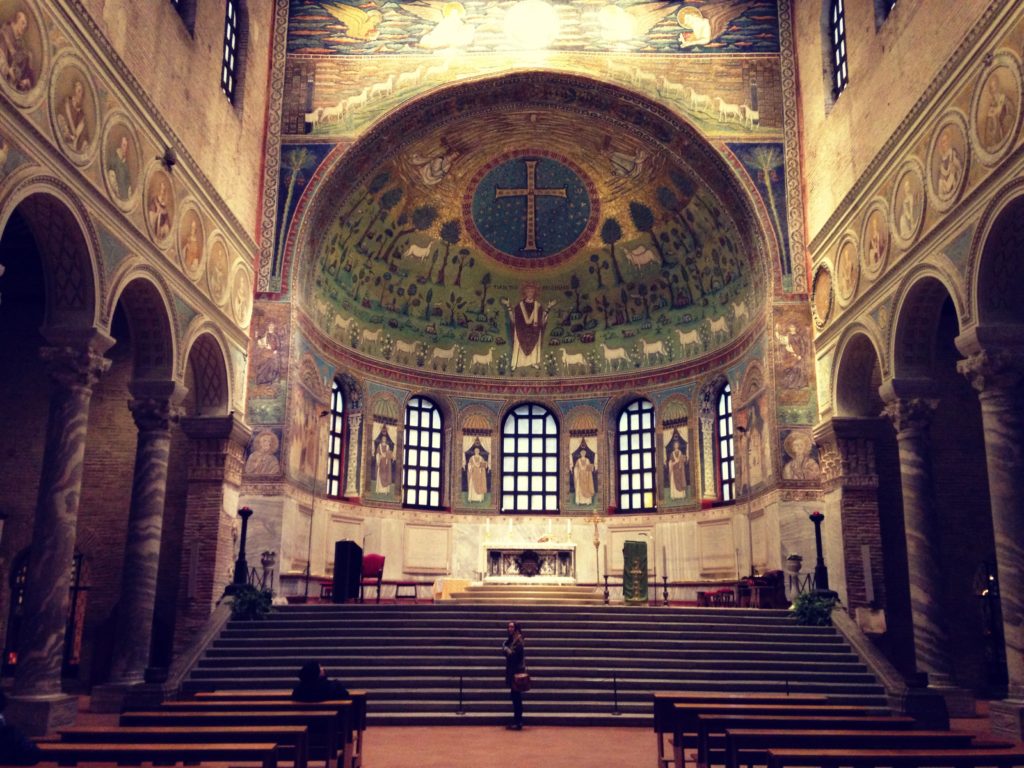 I smiled under the garden you can see on the apse of Sant’Apollinare in Classe cathedral. There was my mother with me and I took her hand: a kind of earthly happiness. Behind us, many other people. They were all observing that green flowery valley, decorated with rocks, plants, birds, and bushes. Twelve lambs, two palms, a starry sky, and some clouds. This is the representation of Heaven, say historians and art experts. However, it reminded me of our world, of its simplicity, fragility and wonderfulness. I smiled and held my mother’s hand again.

Thanks Ravenna, thank you for reminding me of the greatness of the human soul and the peaks of our genius.