How long has it been since I sent you my last love letter. One year, time flies. And loves make immense turns and it comes back, doesn’t it.

Do not take it bad, my dear city. Do not think that I do not love you anymore.
It’s just that …
Let’s leave aside politics and who decides what in your streets. And let’s not talk about those who say that they love you, while they actually direct funds and projects that leave your squares and museums empty.

I am still in love with you. 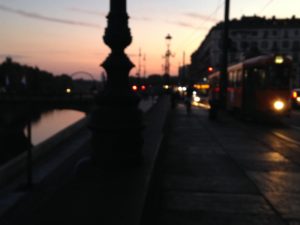 I am in love with the roots of the trees in the Cavour Gardens. I do not know how many times I have been in that park and only recently I saw them appearing
in the middle of all those golden leaves that have been falling on the ground over the last few weeks: our attention plays tricks on us.
They resemble capillaries which have been brought to surface by a much higher and more skilled hand than us. They anchor them on the ground and after spending a few minutes near them, I somehow felt stronger.

I love a shop, then.
A shop that is located in via Po 40. I love it because every time I walk by it makes me laugh: half of it is a bar, half a jewelry shop. It makes me laugh because I renamed that shop “split personality”. It has two souls and probably two separate accounts but they are united forever in the same narrow urban space.

There is that villa, then, in Via Canova 52. On one of the walls, a dedication I recently discovered, a sign of a different love: the heart of a son who gives thanks for his good-hearted, intelligent and courageous mother.Are this son’s words a way to freeze time? As if to say: “I write it here, on this wall, in the middle of traffic: at least here, your memory, your dignity, your courage will remain fearless”.

I also like to hug Porta Nuova. No, the whole train station, because it would take me too long. I would like to hug a commemorative plaque that can be seen in front of platform 17, if I am not wrong. It is a plaque that should remind contemporary travelers that from there trains would depart full and would come back empty. It is a plaque that binds these present days, full of brown and ugly clouds and beatings, to a world that we promised would not be repeated. We have failed, miserably. 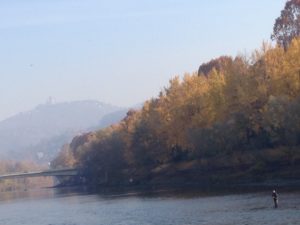 And then, I love the River Po. Even if it is chemical and dirty and people say that if you fall into it, you come out with three legs and gills. I love it anyway, because on his shores I have witnessed everything in these years: I saw sweethearts, sweaty sportsmen, fishermen who seemed to walk on water, dogs, cats and mice, and upset owners who ran after their animals (ok, they were running away from mice). In the silhouettes sewn by the evening, I saw seagulls and nutrias playing slapjack. Who knows where they come from, the seagulls. I love the river Po because it shines when it’s sunny. And if it shines because it’s chemical, I do not care because you do so, when you’re in love.

I will be a bit snobby, but I would invite to join me in a romantic dinner the mosaic tiles of Mulassano, which welcome you just outside its door and which unfortunately are not noticed because they are hidden by chairs and tables until the bar is open. I know, many will say that they would rather go out with their sandwiches. Or with its ceiling, made with Madeira leather. If I really have to tell you everything, dear Torino, I would also go out with the clock behind the counter in Mulasssano: it only has one hand and all the numbers that indicate the hours are scattered around the clock. It’s a crazy clock that is operated by a button located near the cash desk and is used to decide who, in a group of friends, has to pay the bill. Who makes the highest number, will look after the check.

To conclude our gallant appointment, I must admit that I feel an awkwardly hidden passion for the Royal Library, there, on the corner of Piazza Castello. It does not matter how many times I walk by it. If it’s open, I have to enter – even for a few minutes. Because this cathedral of knowledge seems shy: it hides under the arches that lead to the Teatro Regio. Because I feel fine if I am around books. Because there is a vault downstairs and it occasionally hosts incredible exhibits. All these reasons make me love this place, and I can not do anything about it.