You thought my French stories were over. But no, they aren’t at all. After a short Venetian break (you can read it here), today I felt like telling about Montpellier, which was the largest and most populated centre I visited in my French month in October 2021. A resplendent and splendid city, lit by the sun for 2,670 hours a year. You do the math. I was supposed to stay 1 night, but I ended up staying 3. You will soon see why. 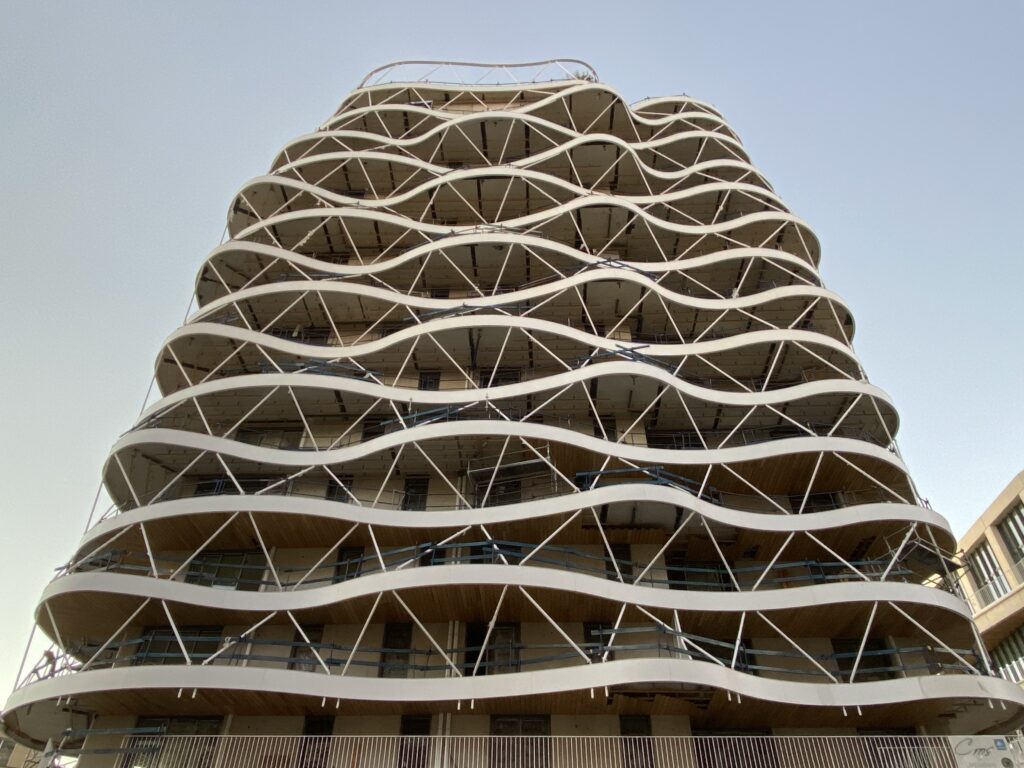 I get there early in the morning by train from Beaucaire, and after dropping my backpack at the Hotel Campanile, opposite the station, I get out in the fresh air. In fact, I almost run coming out of this bright hotel, as if someone is chasing me. The joy of travel is crazy and incomprehensible at times. I had read about the more modern architectural areas of Montpellier, and it is from some of these Blade Runner-esque neighbourhoods and structures that I invite you to start. 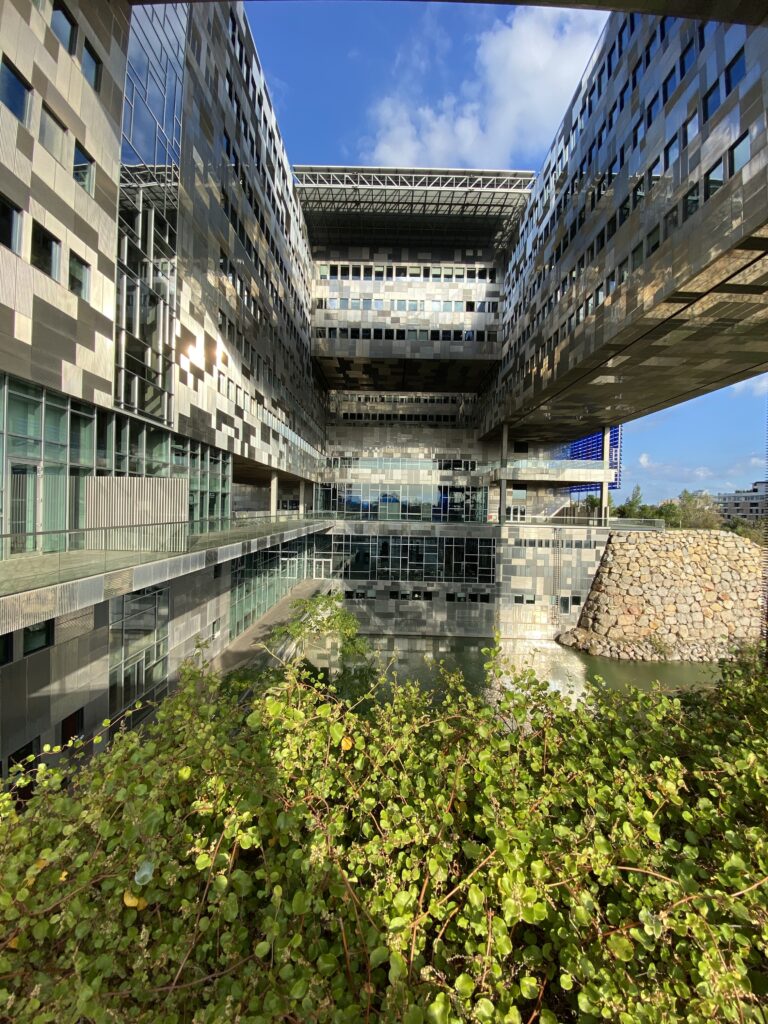 The first building I went to photograph was the Georges Frêche City Hall, a parallelepiped measuring 90 metres in length, 40 in height and 50 in width that stands proudly in the square that bears the same name as the French politician to whom this structure is dedicated. Clad in blue aluminium, the City Hall is deserted when I get there: it looks like a spaceship surrounded by other buildings, also resembling spacecraft. They immediately remind me of those described by JG Ballard in “High Rise,” which I am incidentally reading while I am in the south of France. 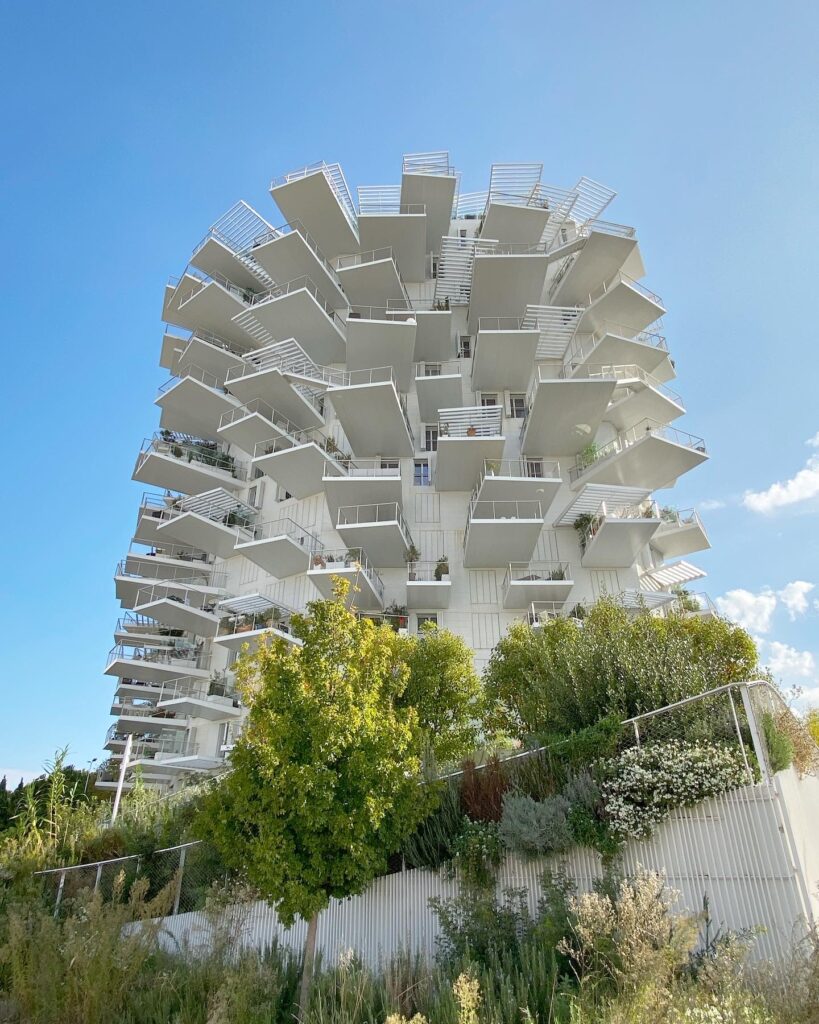 Via an excellent public transportation system, I then arrive at the Arbre Blanc. Here is another excellent reason to visit Montpellier. There would be a whole book to be written about this very strange gleaming white building on the banks of the Lez River, one of the city’s waterways. 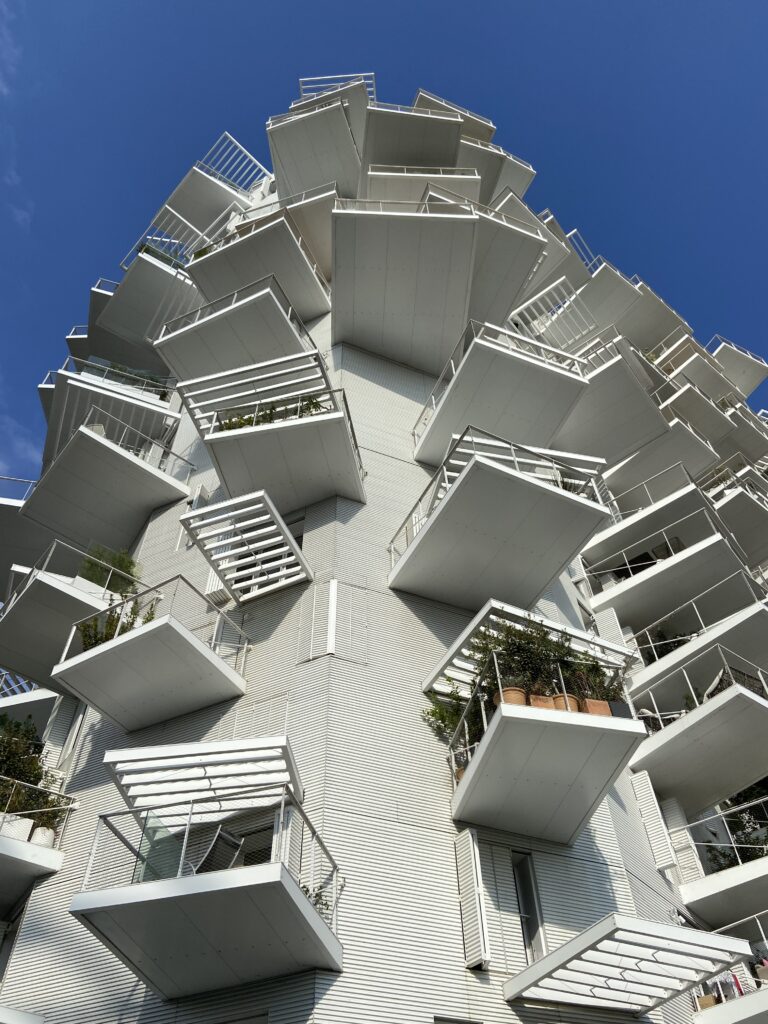 As you have probably guessed from the name, it is a tree-inspired building, with balconies extending from the trunk protected by steel roofs – which are also white – that articulate and make the exterior surfaces dynamic. The numerous terraces and pergolas move me away from the idea of the Ivory Tower that the name at first reminded me of: they seem, in fact, to promote the idea of outdoor living and may -perhaps – develop a new kind of relationships among the residents (very, but very affluent, given the costs of the various apartments).

On a brochure that I find on a bulletin board in front of the entrance to the Arbre Blanc – where one is urged to live inside a tree (habitez dans un arbre!) – it says that each dwelling boasts an outdoor space of at least 7 square metres, while the largest goes up to 35.

I often find myself talking to myself – like a madwoman – as I travel alone, and I hear myself murmuring that I could live inside a tree only if I could become a leaf. 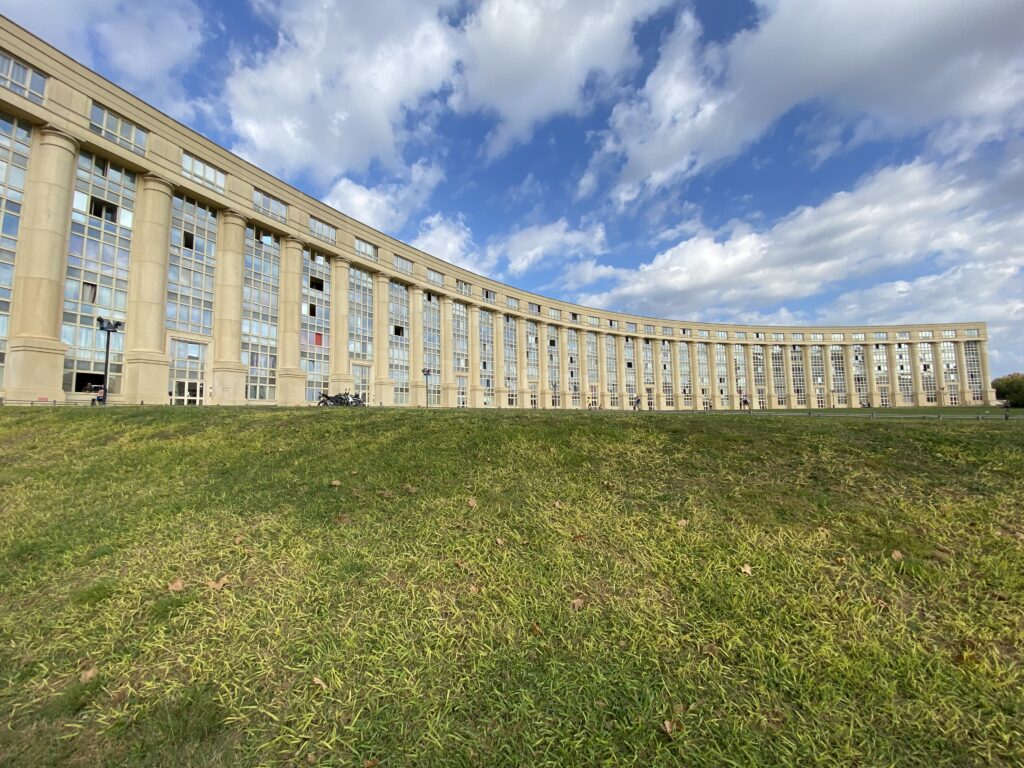 The Antigone Neighbourhood covers more than 30 hectares, and I get there by taking a nice walk along the banks of the Lez. This area-in the not-so-distant past-was completely covered with barracks, but thanks to the genius of Spanish architect and urban planner Ricardo Bofill it has become something else entirely.

Based loosely on the canons of Greek architecture, the link with that world is maintained in the names of the streets and squares: Rue de Thebe, Place de Marathon, Place de Sparte and so on. The Hotel de Region looks dramatic to me from the very shore where the Arbre Blanc is located. 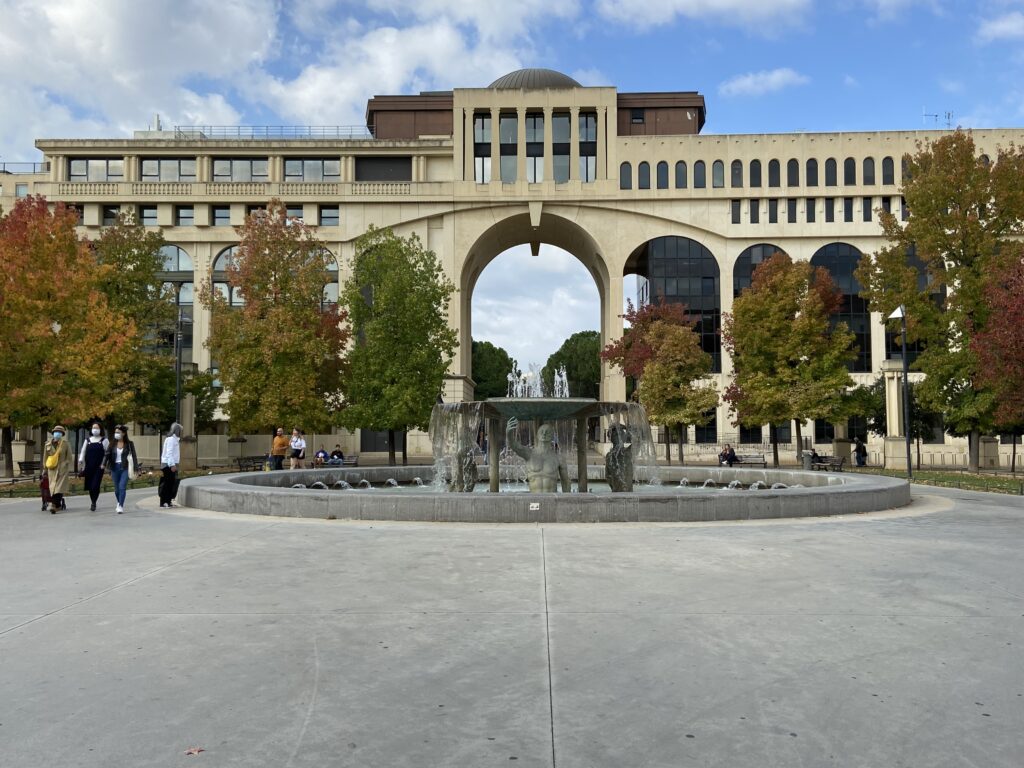 Antigone is not a huge circus where no one lives, though: quite the contrary. In Place d’Europe, for example, a giant semi-circular area with a crescent of buildings, I sit and watch kids playing sports and others exchanging words. In another square, whose name I slyly did not mark, I eat something at the market.

The last image is of the Polygone Shopping Centre: the structure is formed by a series of diagonal staircases leading upward, which gave the structure its name of Les echelles de la ville, the stairs of the city. Nearby, a media library has been dedicated to Federico Fellini.

The old districts: the great French past

But Montpellier is also and above a symbol of a great French past.

Here, for example, at the end of the 16th century, the first university botanical garden in all of France was founded: the Jardin des Plantes is still an integral part of the city and the university, but it is intended at the beginning for the Culture of the Simple, before serving in teaching the use of plants for future doctors and pharmacists. There are wonderful, rare, and very old plants and trees. It is a jungle away from the noise and traffic of the city. 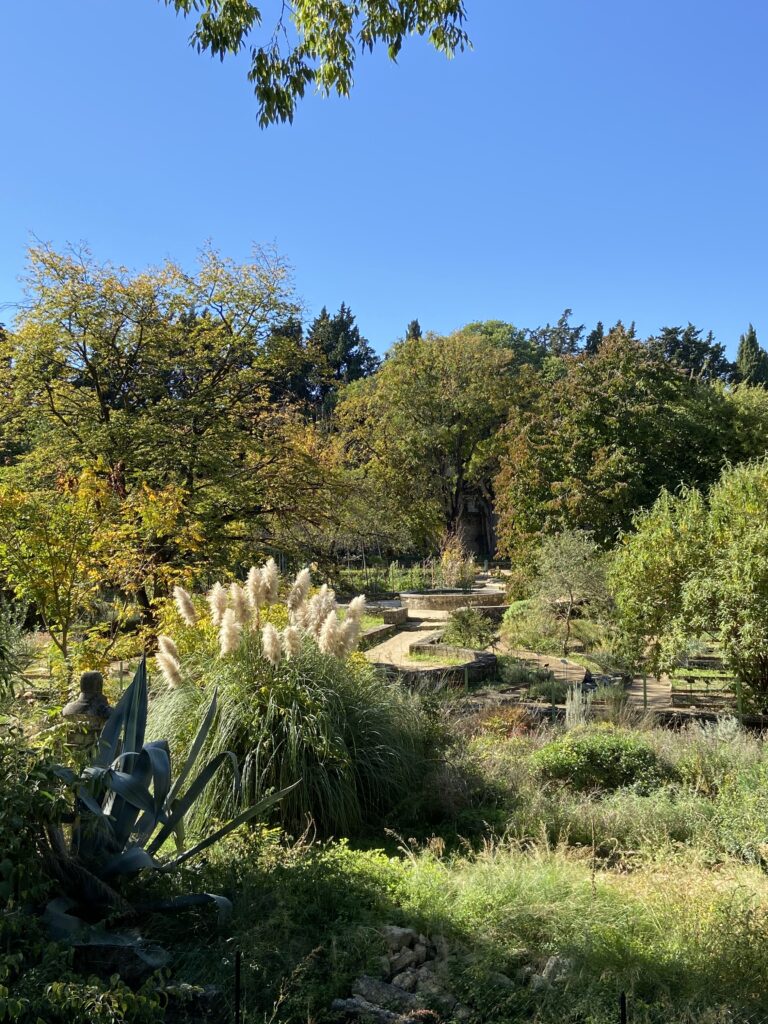 In the Place Royale du Peyron, where the medieval old town called Écusson begins, you have access to a splendid viewpoint, dominated by the Château d’Eau, an emblematic monument that is perfectly reflected in a small body of water. If I close my eyes, I still remember the light of that morning. It is amazing what memory holds. 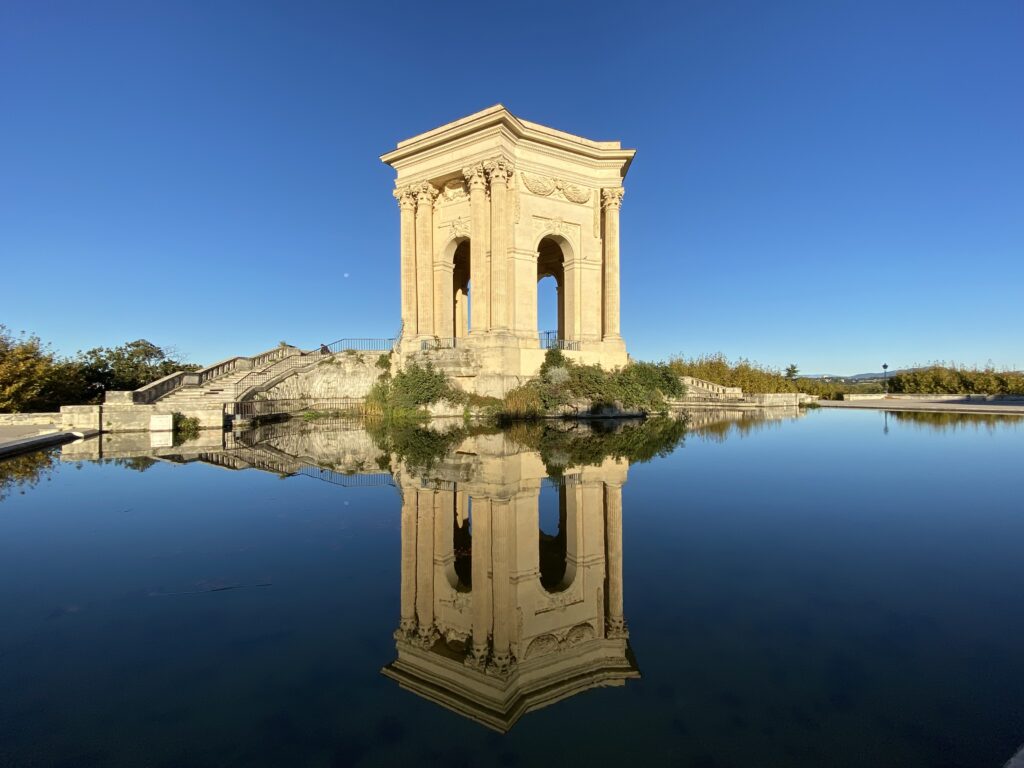 Then nearby is the home of the Montpellier Faculty of Medicine: founded in 1220, it is the oldest university in the world for medicine, in the legal and conceptual sense of the term “university” as defined from the 13th century onward in Europe, just as the universities of Paris, Oxford and Bologna are for theology, liberal arts (Paris) and law (Oxford and Bologna). Its motto refers to the Hippocratic tradition that formed the core of medical education at its founding: Olim Cous nunc Monspeliensis Hippocrates (“Once Hippocrates was from Kos, now he is from Montpellier”).

Among the various personalities who graduated here, I could mention Nostradamus, but that would be playing easy. May I add then – cheekily – that François Gigot de Lapeyronie also did his studies here. Do you not know him? In 1743 Lapeyronie first described the disease that takes his surname, namely that of plastic hardening of the corpora cavernosa. Still not clear to you? Go and type it into Google. What you don’t learn working in a medical company. 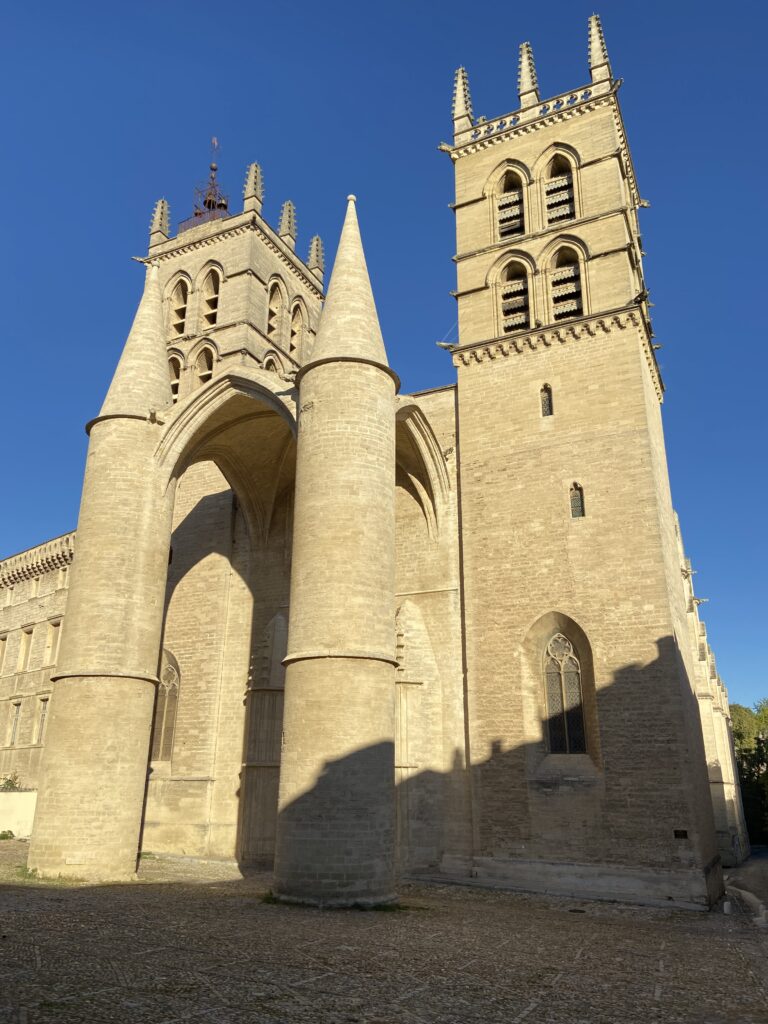 And to conclude this article and move from the profane to the sacred, nearby you could end your visit to historic Montpellier with a stroll to the Cathedral of Saint Pierre: the church looks almost like a medieval fortress with its two towers topped by an imposing portico. It was commissioned by Pope Urban V in the late 14th century and became a cathedral in the 16th century. I did not have a chance to find it open, so if you eventually take my advice and go to Montpellier let me know if the interior was as fascinating and impressive as the exterior.

Thanks to a system of fast streetcars and a bus, it takes half an hour from the centre of Montpellier to get to Palavas-les-Flot, a small town directly resting on the Mediterranean, cut into Rive Gauche and Rive Droite by a beach that was almost completely deserted when I arrived.

There are here and there a few small groups of elderly people, a few grandparents with grandchildren, and a small company of children who are part of a sailing school. Palavas-les-Flot is not as charming as Saintes Maries de la Mer, but it is still an experience I recommend.

Why? Because it was on this very deserted beach that I got a sense of the huge rifts and social cracks present in France, even here in the south and not just in large centres like Paris or Marseille.

Observing how many are like me in this village, on a beautiful sunny morning, and how many I met to get here, I realize once again the different social levels present in this nation: on the sands of Palavas there were nothing but white Frenchmen, while “the others” were cutting grass, driving buses, picking up trash. I do not think I have the proper tools to comment on this distinction or even to describe it correctly, but I find myself wondering whether these divisions are indeed such and whether, for example, they are also reflected in the spoken language, in the way words are pronounced. 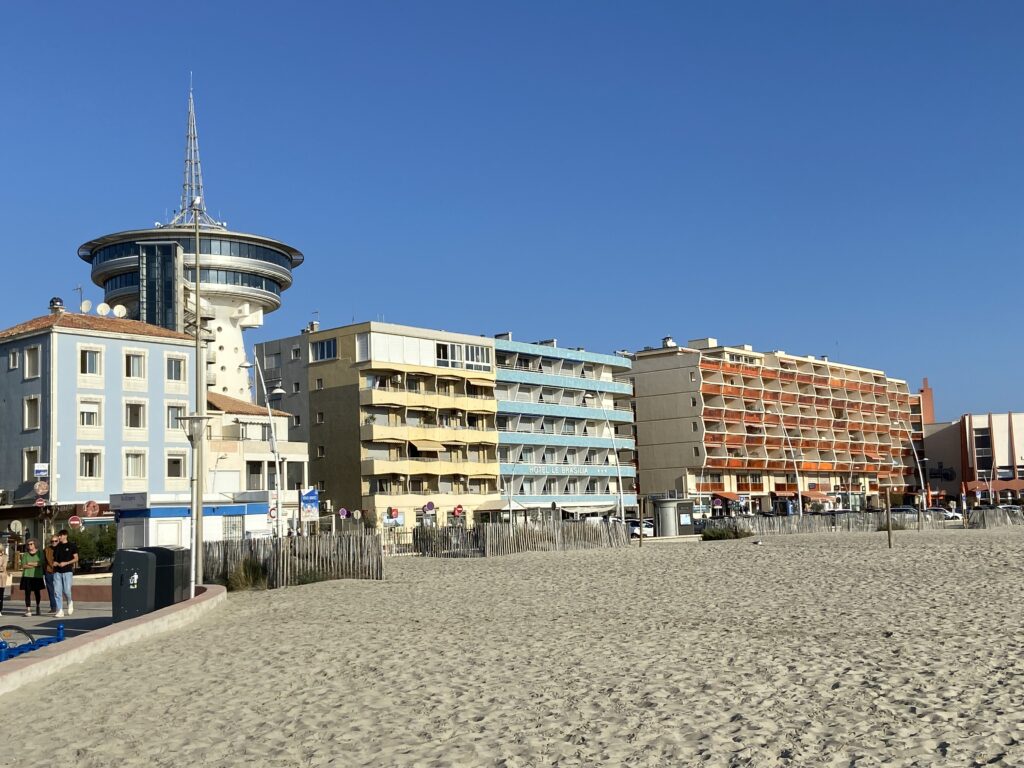